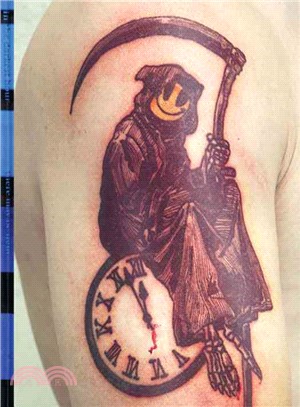 Published to accompany the exhibition at the Serpentine Gallery, London in November 2006,In the darkest hour there may be light provides a revealing and concise overview of Damien Hirst’s murderme collection to date. As Julia Peyton-Jones puts it in the Director’s Foreword to this beautifully produced catalogue, Damien Hirst’s groundbreaking and controversial work has made him one of the world’s best-known living artists. From the start of his career, Hirst adopted the role of curator, organising a series of exhibitions with a group of young artists who would come to define cutting-edge art in the 1990s.” Hirst has continually bought and collected works by artists who have inspired and influenced him, such as Francis Bacon, Andy Warhol and Richard Prince, by artists from his own generation such as Sarah Lucas, Angus Fairhurst and Marcus Harvey, and by those at the early stages of their careers such as Rachel Howard, Nicholas Lumb and Tom Ormond.
Accompanying the 75 excellent full colour plates of works by the 24 artists exhibited in the show is a humorous but poignant essay by artist and writer Harland Miller reflecting on the idea of collecting from childhood, how obsessive it is, and what a collection is to a collector and to those who see a collection. But it is the interview between Hirst and Hans Ulrich Obrist that gives a direct insight into the motivation and reason behind the murderme collection, and how it relates to Hirst the artist and Hirst the curator. Completed over three months during the summer of 2006, this interview discusses everything from his most famous works, his drawings, influences, practice and attitude towards art, to new projects such as Toddington Manor and the Newport Street Gallery. In many respects 'In the darkest hour there may be light’ is perhaps the most comprehensive and intriguing project Hirst has done yet: Collecting is the way the world works, as a human being. As you go through life, you just collect I always think collections are like a map of a man’s life.”
PrevNext