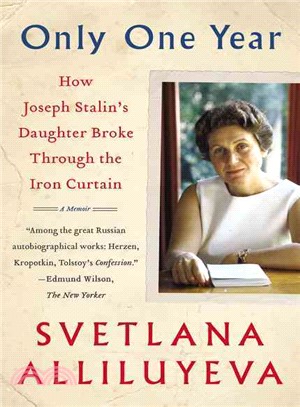 After the success of her New York Times-bestselling childhood memoir Twenty Letters to a Friend, Josef Stalin’s daughter Svetlana Alliluyeva—subject of Rosemary Sullivan’s critically acclaimed biography Stalin’s Daughter—penned this riveting account of her year-long journey to defect from the USSR and start a new life in America.

The story of Only One Year begins on December 19, 1966, as Svetlana Alliluyeva leaves Russia for India, on a one-month visa, in the custody of an employee of the Soviet Ministry of Foreign Affairs. It ends on December 19, 1967, in Princeton, New Jersey, as she and two American friends join in a toast to her new life of freedom.

That year of pain, discovery, turmoil, and new hope reaches its climax with her decision to break completely from the world of Communism, to turn her back on her country, her children, and the legacy of her notorious father—Joseph Stalin. Why did she make such a drastic choice? This book, a detailed account of reality in the USSR, is her explanation.

Frank, fascinating, and thoroughly engrossing, Only One Year reveals life behind the Iron Curtain, the risks and subterfuge of defection, and one extraordinary woman’s fight for her future.