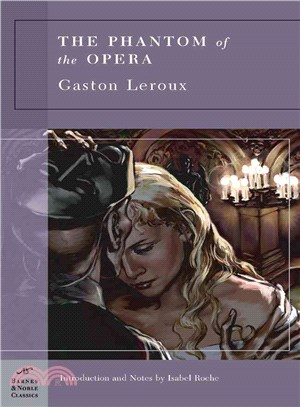 The Phantom of the Opera, by Gaston Leroux, is part of the Barnes & Noble Classics series, which offers quality editions at affordable prices to the student and the general reader, including new scholarship, thoughtful design, and pages of carefully crafted extras. Here are some of the remarkable features of Barnes & Noble Classics:
All editions are beautifully designed and are printed to superior specifications; some include illustrations of historical interest. Barnes & Noble Classics pulls together a constellation of influences?biographical, historical, and literary?to enrich each reader's understanding of these enduring works.
The Paris Opera is haunted?everyone knows it. Everyone, that is, except for the new managers, who spark a violent dispute with the Opera Ghost when they refuse to acknowledge his existence or submit to his demands. Sometimes surfacing as a disembodied voice in Box Five or appearing as a gentleman in evening dress with a death’s-head, the phantom is obsessed with Christine Daae, a lovely and enigmatic novice singer endowed with an amazing voice. But impetuous Viscount Raoul de Chagny is in love with Christine, and he and his brother, Count Philippe, are swept into the phantom’s deadly illusion with horrifying consequences.