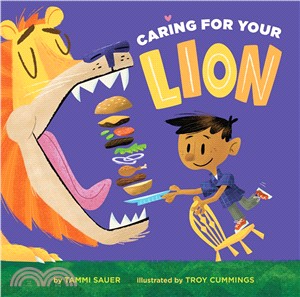 What happens when you expect an itty-bitty kitty . . . but get a lion instead?
It’s kitten delivery day, but—SURPRISE. Congratulations on your new LION! We know you ordered a kitten, but we ran out of those. Fortunately, the big cat comes with instructions—like, try very hard NOT to look like a zebra. Or a gazelle. And give your lion PLENTY of space to play. But soon the feathers and fur start flying and everything’s in chaos. Is there any way a lion could actually be a child’s purr-fect pet?
Tammi Sauer is the author of Chicken Dance, Bawk and Roll, Cowboy Camp, Mary Had a Little Glam, Your Alien Returns, and Your Alien, which has earned starred reviews from Publishers Weekly and Kirkus (all Sterling). She is an active blogger (tammisauer.com) and highly involved in the children's writer community, in addition to being a great promoter of her own books. Tammi has worked as a teacher and library media specialist and now lives in OK with her husband and their two children. Her local indie bookstore, Best of Books, in Edmond, OK, has named July 9 Tammi Sauer Day. Follow her on Twitter at @SauerTammi.
?
Troy Cummings runs his own design studio, and his clients have included Time for Kids, New York Daily News, Pearson/Scott Foresman, Random House, and the Cartoon Network. Along with writing and illustrating several children's books—including The Twelve Days of Christmas in Indiana (Sterling)—he has created animated versions of a child's nightmare for a production of a Ravel opera—his animations were projected onto screens above the stage to interact with the performers. Troy lives in Greencastle, IN, with his cat and family. Visit him online at troy-cummings.squarespace.com.
PrevNext