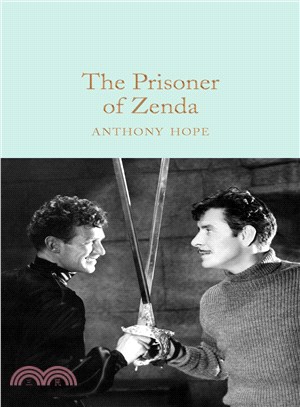 English gentleman, Rupert Rassendyll, arrives in the kingdom of Ruritania on the eve of King Rudolf’s coronation. That night the king is abducted and held prisoner in a castle in the small town of Zenda. Rupert, who bears an uncanny resemblance to Rudolf, is persuaded to impersonate the King in order to stop the king’s brother, Prince Michael, from seizing the throne. Rupert is determined to rescue the King but can he defeat the dastardly villain, Rupert of Hentzau?

A swashbuckling adventure that never takes itself too seriously, Anthony Hope's The Prisoner of Zenda is packed with intrigue, backstabbing, bravery and romance.

This beautiful Macmillan Collector's Library edition of The Prisoner of Zenda features an afterword by children’s author, Philip Ardagh.

Sir Anthony Hope Hawkins was born in 1863 and, after taking a degree at Oxford University, was called to the bar in 1887. He initially combined a successful career as a barrister with writing but the immediate success of his tenth book, The Prisoner of Zenda (1894) allowed him to become a full time writer. The novel spawned a new genre – Ruritanian romance – and has been adapted numerous times for film, television and stage. In all, Hope wrote thirty-two works of fiction and an autobiography. At the close of the First World War he was knighted for his contribution to propaganda work. Hope died in 1933.
PrevNext