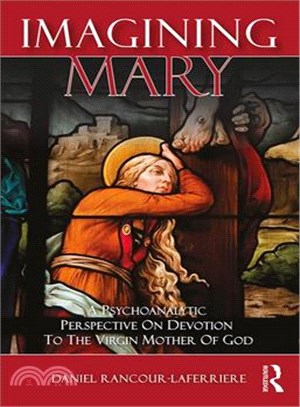 Imagining Mary breaks new ground in the long tradition of Christian mariology. The book is an interdisciplinary investigation of some of the many Marys, East and West, from the New Testament Mary of Nazareth down to Our Lady of the Good Death in the twentieth century. In Imagining Mary, Professor Rancour-Laferriere examines the mother of God in her multireligious and pan-historical context.

The book is a scholarly study, but it is written in a clear, straightforward style, and will be comprehensible to an educated and – above all, intellectually curious – general audience. It will appeal to anyone who has ever wondered, for example, about the flimsy scriptural basis of many beliefs about Mary; or the tendency of many mariologists to depict Mary as an incestuous "bride of Christ;" or the theological notion of Mary’s "loving consent" to her son’s crucifixion; or the idea that Mary was a "priest" officiating at the sacrifice of her son; or the unfortunate association of Mary with Christian antisemitism; or the curious appeal of Mary to the terminally ill; and so on. Special attention is given to the psychology of representations of Mary, such as: the psychological basis of promoting Mary to the status of a "goddess;" the psychology of Mary’s compassion for her son at the foot of the cross; the psychological conflict in Mary’s personal relationship with her son Jesus.

These topics are admittedly diverse, but they all have long been on the minds of mariologists. The author takes a questioning approach to received wisdom about marian themes – including the assumption that one has to be a theist in order to understand the great appeal of Mary down the centuries. Indeed, Imagining Mary may be regarded as a first step in the direction of an atheist mariology.

Daniel Rancour-Laferriere was born and was baptized into the Roman Catholic Church in 1943, grew up a devout Catholic, and served as president of his Newman Club in college. Since receiving a PhD in Slavic Languages and Literatures from Brown University in 1972, Rancour-Laferriere has published numerous scholarly articles as well as a dozen books, including The Slave Soul of Russia (1995), Tolstoy on the Couch (1998) Tolstoy’s Quest for God (2007), and The Sign of the Cross (2011). As Emeritus Professor at the University of California, Davis, Rancour-Laferriere continues his psychological research on Christian themes.