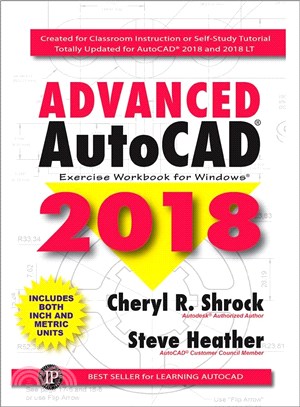 The AdvancedAutoCAD® 2018 Exercise Workbook has been helping students, teachers, architects, designers and manufacturers to truly master the software for more than two decades.  And now this work is better than ever, with the inclusion of both inch and metric measurements side-by-side.

The 2018 version of the software boasts the new feature of being able to import SHX fonts when importing documents into AutoCAD®.  With past versions, you could only import SHX fonts as objects that were included in the PDF, which meant that users could not alter the text in any way.  In this 2018 version of the software, the text will be fully editable – the same as TrueType text and fonts.  That’s a tremendous advantage for architects and designers, who use SHX fonts extensively in their drawings.  These new features will be explained and thoroughly illustrated so they can be combined with existing AutoCAD® options, and users can maximize the full power of this versatile software.

Written by Cheryl Shrock and Steve Heather, two bestselling authors and official Beta Testers of AutoCAD® software, this is an invaluable resource for the thousands of students, designers, architects, and manufacturers who are just learning AutoCAD®, or getting up to speed with the latest version of the software.

Cheryl Shrock is a retired Professor and Chairperson of Computer Aided Design at Orange Coast College in California.? The AutoCAD Exercise Workbooks are the result of both her teaching skills and her industry experience.? She is an AutodeskR registered author.

Steve Heather is a former Lecturer of Mechanical Engineering and Computer Aided Design in England, UK.? For the past 8 years, he has been a Beta Tester for AutodeskR, testing the latest AutoCADR software.? He is the co-author of the bestselling series of Beginning and Advanced AutoCADR Exercise Workbooks.? Previous to teaching, and for more than 30 years, Heather worked as a Precision Engineer in the aerospace and defense industries.?