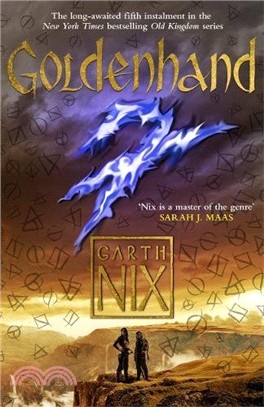 Goldenhand is the long-awaited fifth installment of Garth Nix's New York Times bestselling Old Kingdom series, now in paperback
Lirael is no longer a shy Second Assistant Librarian. She is the Abhorsen-in-Waiting, with dead creatures to battle and Free Magic entities to bind. She's also a Remembrancer, and wielder of the Dark Mirror.
When Lirael finds Nicholas Sayre lying unconscious after being attacked by a hideous Free Magic creature, she uses her powers to save him. But Nicholas is deeply tainted with Free magic and Lirael must seek help for him at her childhood home, the Clayr's Glacier.
But even as she returns to the Clayr, a messenger is trying to reach Lirael with a dire warning from her long-dead mother, Arielle, about the Witch with No Face. But who is the Witch, and what is she planning?

Once more a great danger threatens the Old Kingdom, and it must be forestalled not only in the living world, but also in the cold, remorseless river of Death.