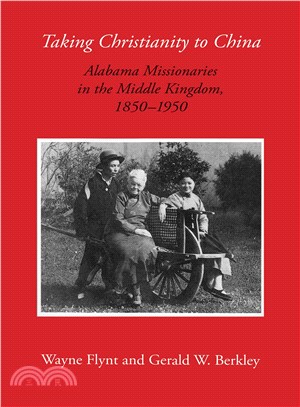 Beginning early in the 19th century, the American missionary movement made slow headway in China. Alabamians became part of that small beachhead. After 1900 both the money and personnel rapidly expanded, peaking in the early 1920s. By the 1930s many American denominations became confused and divided over the appropriateness of the missionary endeavor. Secular American intellectuals began to criticize missionaries as meddling do-gooders trying to impose American Evangelicalism on a proud, ancient culture.

By examining the lives of 47 Alabama missionaries who served in China between 1850 and 1950, Flynt and Berkley reach a different conclusion. Although Alabama missionaries initially fit the negative description of Americans trying to superimpose their own values and beliefs on "heathen," they quickly learned to respect Chinese civilization. The result was a new synthesis, neither entirely southern nor entirely Chinese. Although previous works focus on the failure of Christianity to change China, this book focuses on the degree to which their service in China changed Alabama missionaries. And the change was profound.

In their consideration of 47 missionaries from a single state--their call to missions, preparation for service in China, living, working, contacts back home, cultural clashes, political views, internal conflicts, and gender relations--the authors suggest that the efforts by Baptist, Methodist, and Presbyterian missionaries from Alabama were not the failure judged by many historians. In fact, the seeds sown in the hundred years before the Communist revolution in 1950 seem to be reaping a rich harvest in the declining years of the 20th century, when the number of Chinese Christians is estimated by some to be as high as one hundred million.

Wayne Flynt is a distinguished university professor emeritus at Auburn University and the author or coauthor of twelve books, including Alabama in the Twentieth Century; Alabama Baptists: Southern Baptists in the Heart of Dixie; Dixie's Forgotten People: The South's Poor Whites;?and a memoir, Keeping the Faith: Ordinary People, Extraordinary Lives.
?
Gerald W. Berkley is an assistant director for International Support Services at Virginia Tech.