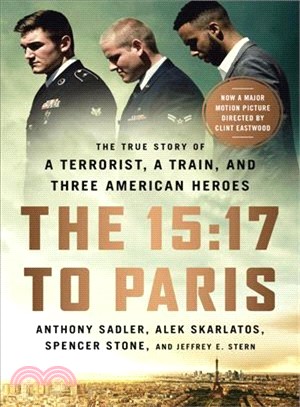 On August 21, 2015, Ayoub al-Khazzani boarded the 15:17 train in Brussels, bound for Paris. Khazzani's mission was clear: he had an AK-47, a pistol, a box cutter, and enough ammunition to obliterate every passenger on the crowded train. Slipping into the bathroom in secret, he armed his weapons and prepared to launch his attack.

But when he emerged, he encountered something he hadn't anticipated: three Americans who refused to give in to fear.

Anthony Sadler, Alek Skarlatos, and Spencer Stone were childhood friends taking a vacation together. They had some relevant training: Stone was a martial arts enthusiast and airman first class in the US Air Force; Skarlatos was an active duty member of the Oregon National Guard; and not one of the three was afraid of a fight. But their decision to charge the gunman and overpower him even as he turned first his gun, then his knife, on Stone would never have happened if they hadn't had a lifetime of trust, support, and loyalty between them.

This book is the gripping, true story of a terrorist attack that would have killed more than 500 people if not for their actions, but it is also the story of three American boys and their friendship.

Using each hero's point of view in sequence, The 15:17 to Paris skillfully builds the drama of the attack, while weaving in the stories of the protagonists' lives, the friendship and loyalty that would come to define them, and the events that led them, inexorably, to that fateful day.

The 15:17 to Paris is an amazing true story of unparalleled, unexpected courage, and people coming together against fear rather than splitting apart. It is a story of near tragedy averted by three young men who found the heroic unity and strength inside themselves that we all aspire to.
Anthony Sadler is a senior at Sacramento State University, majoring in kinesiology and athletic training. He lives in Sacramento.

Alek Skarlatos is a specialist in the Oregon National Guard. A former student of Umpqua Community College, he was recently a finalist on season 21 of ABC's Dancing with the Stars. He lives in Roseburg, Oregon.

Spencer Stone is a staff sergeant in the US Air Force. He lives in Sacramento.

Jeffrey E. Stern is the author of The Last Thousand: One School's Promise in a Nation at War. He has been named both a Pulitzer Center fellow for crisis reporting, and a graduate fellow at the Stanford Center for International Conflict and Negotiation. Stern's reporting has appeared in Vanity Fair, Esquire, Foreign Policy, The Atlantic, Newsweek, Slate, Time, and The New Republic. He has also been featured on PBS Newshour, NPR's Morning Edition, and MSNBC's Morning Joe, among others.
PrevNext