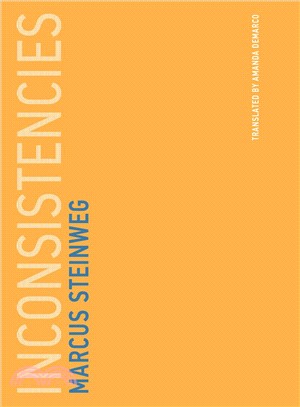 Those who continue to think never return to their point of departure. -- Inconsistencies

These 130 short texts -- aphoristic, interlacing, and sometimes perplexing -- target a perennial philosophical problem: Our consciousness and our experience of reality are inconsistent, fragmentary, and unstable; God is dead, and our identity as subjects discordant. How can we establish a new mode of thought that does not cling to new gods or the false security of rationality? Marcus Steinweg, as he did in his earlier book The Terror of Evidence, constructs a philosophical position from fragments, maxims, meditations, and notes, formulating a philosophy of thought that expresses and enacts the inconsistency of our reality. Steinweg considers, among other topics, life as a game ("To think is to play because no thought is firmly grounded"); sexuality ("wasteful, contradictory, and contingent"); desire ("Desire has a thousand names; It's earned none of them"); reality ("overdetermined and excessively complex"); and world ("a nonconcept"). He disposes of philosophy in one sentence ("Philosophy is a continual process of its own redefinition.") but spends multiple pages on "A Tear in Immanence," invoking Nietzsche, Heidegger, Sartre, and others. He describes "Wandering with Foucault" ("Thought entails wandering as well as straying into madness") and brings together Derrida and Debord. He poses a question: "Why should a cat be more mysterious than a dog?" and later answers one: "Beauty is truth because truth is beauty." By the end, we have accompanied Steinweg on converging trains of thought. "Thinking means continuing to think," he writes, adding "But thinking can only pose questions by answering others." The question of inconsistency? Asked and answered, and asked.