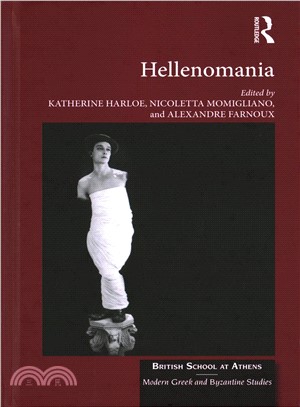 Hellenomania, the second volume in the MANIA series, presents a wide-ranging, multidisciplinary exploration of the modern reception of ancient Greek material culture in cultural practices ranging from literature to architecture, stage and costume design, painting, sculpture, cinema, and the performing arts. It examines both canonical and less familiar responses to both real and imagined Greek antiquities from the seventeenth century to the present, across various national contexts. Encompassing examples from Inigo Jones to the contemporary art exhibition, documenta14, and from Thessaloniki and Delphi to Nashville, the contributions examine attempted reconstructions of an ‘authentic’ ancient Greece alongside imaginative and utopian efforts to revive the Greek spirit using modern technologies, new media, and experimental practices of the body. Also explored are the political resonances of Hellenomaniac fascinations, and tensions within them between the ideal and the real, the past, present and future.

Part I examines the sources and derivations of Hellenomania from the Baroque and pre-Romantic periods, to the early twentieth century. While covering more canonical material than the following sections, it also casts spotlights on less familiar figures and sets the scene for the illustrations of successive waves of Hellenomania explored in subsequent chapters; Part II focuses on responses, uses, and appropriations of ancient Greek material culture in the built environment – mostly architecture –, but also extends to painting and even gymnastics; it examines in particular how a certain idealisation of ancient Greek architecture affected its modern applications. Part III explores challenges to the idealisation of ancient Greece, through the transformative power of colour, movement, and of reliving the past in the present human body, especially female. Part IV looks at how the fascination with the material culture of ancient Greece can move beyond the obsession with Greece and Greekness.

Katherine Harloe is Associate Professor of Classics and Intellectual History at the University of Reading. Her research specialisms are the history of classical scholarship and the reception of Greek and Roman antiquity in European (especially German) culture from the mid-eighteenth to the mid-twentieth centuries. In addition to numerous articles, she is author of Winckelmann and the Invention of Antiquity: history and aesthetics in the age of Altertumswissenschaft (2013) and co-editor of Thucydides and the Modern World: reception, reinterpretation and influence from the Renaissance to today (2012).

is Professor of Aegean Studies at the University of Bristol, specialising in Minoan archaeology and its reception. She has directed and co-directed several archaeological projects in Crete and Turkey, and has published many articles and book on Aegean subjects, including Cretomania: Modern Desires for the Minoan Past (2017, co-edited with Alexandre Farnoux) and Archaeology and European Modernity: Producing and Consuming the Minoans (2006, co-edited with Yannis Hamilakis).

is Professor of Archaeology and History of Art at the University of Paris IV (Sorbonne) and, since 2011, has been Director of the French School in Athens. He is an expert on the archaeology of Delos and especially of Crete, where he has directed excavations at Malia and Dreros. He has published many works on Greek and Aegean topics, including Cnossos, l'archeologie d'un reve (1993) and Homere, le prince des poetes (2010).
PrevNext