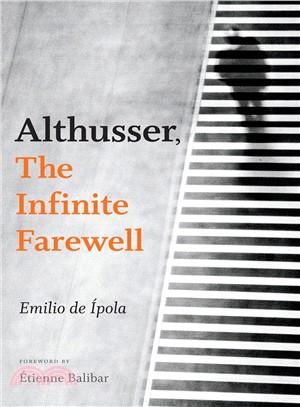 In Althusser, The Infinite Farewell—originally published in Spanish and appearing here in English for the first time—Emilio de Ípola contends that Althusser’s oeuvre is divided between two fundamentally different and at times contradictory projects. The first is the familiar Althusser, that of For Marx and Reading Capital. Symptomatically reading these canonical texts alongside Althusser’s lesser-known writings, de Ípola reveals a second, subterranean current of thought that flows throughout Althusser’s classic formulations and which only gains explicit expression in his later works. This subterranean current leads Althusser to move toward an aleatory materialism, or a materialism of the encounter. By explicating this key aspect of Althusser’s theoretical practice, de Ípola revitalizes classic debates concerning major theoretico-political topics, including the relationship between Marxism, structuralism, and psychoanalysis; the difference between ideology, philosophy, and science; and the role of contingency and subjectivity in political encounters and social transformation. In so doing, he underscores Althusser’s continuing importance to political theory and Marxist and post-Marxist thought.
Emilio de Ípola is Distinguished Professor at the University of Buenos Aires and the author of several books in Spanish.

Étienne Balibar is Emeritus Professor of Philosophy at the Université de Paris–X Nanterre, and the author of Equaliberty, also published by Duke University Press.
PrevNext