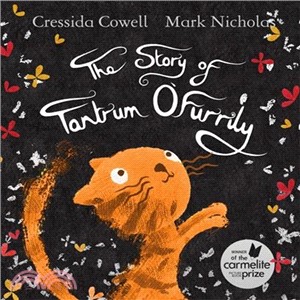 'One wild and windy night a stray cat called Tantrum O'Furrily and her three hungry kittens were dancing across the roof tops . . . '

Written by Cressida Cowell, creator of the bestselling How to Train Your Dragon series and with beautiful illustrations by Mark Nicholas, winner of the Carmelite Prize.

Tantrum O'Furrily's kittens are hungry and doubt that a story can ease a stray cat's rumbling stomach. However, they soon learn that stories are powerful, and that if you're courageous you might find a saucer of milk at the end of that story.

How to Train Your Dragon has sold over 8 million books worldwide in 38 languages. It is also an award-winning DreamWorks film series, and a TV series shown on Netflix and CBBC. The first book in Cressida's new series, The Wizards of Once (also signed by DreamWorks), is a number one bestseller.

Cressida is an ambassador for the National Literacy Trust and the Reading Agency, a Trustee of World Book Day and a founder patron of the Children's Media Foundation. She has won numerous prizes, including the Gold Award in the Nestle Children's Book Prize,the 2017 Ruth Rendell Award for Championing Literacy, the Hay Festival Medal for Fiction, and Philosophy Now' magazine's 2015 Award for Contributions in the Fight Against Stupidity.

She grew up in London and on a small, uninhabited island off the west coast of Scotland and she now lives in Hammersmith with her husband, three children and a dog called Pigeon.

Mark Nicholas (Illustrator)
Mark Nicholas is a children's book author/illustrator based in Cardiff, winner of the inaugural Carmelite Prize and the Lara Jones Award.