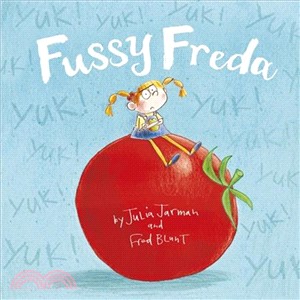 There just isn't any pleasing Fussy Freda. But her cat is not so fussy - and this causes a culinary catastrophe!

This deliciously funny story will have toddlers calling out for more, and more, and MORE!

Schoolteacher and journalist Julia Jarman has written over 80 books for children, including Class Two at the Zoo and Class Three All At Sea, as well as the Big Red Bath series. She lives in Bedfordshire and frequently visits schools and libraries, both in the UK and abroad.

Fred never wanted to be an astronaut or drive a train when he grew up. Right from the beginning he knew he wanted to draw silly pictures for a living. Some decades later, he's living the dream! Fred has worked on all manner of projects, including editorial, advertising and designing animations for the BBC. He now works mostly in children's books, including his own Captain Falsebeard and the Knightmare series with Peter Bently.