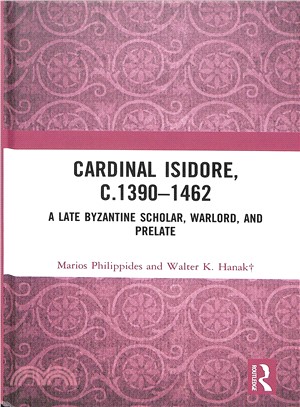 A member of the imperial Palaeologan family, albeit most probably illegitimate, Isidore became a scholar at a young age and began his rise in the Byzantine ecclesiastical ranks. He was an active advocate of the union of the Orthodox and Catholic Churches in Constantinople. His military exploits, including his participation in the defence of Constantinople in 1453, provide us with eyewitness accounts. Without doubt he travelled widely, perhaps more so than any other individual in the annals of Byzantine history: Greece, Asia Minor, Sicily, Russia, Poland, Lithuania, and Italy. His roles included diplomat, high ecclesiastic in both the Orthodox and Catholic Churches, theologian, soldier, papal emissary to the Constantinopolitan court, delegate to the Council of Florence, advisor to the last Byzantine emperors, metropolitan of Kiev and all Russia, and member of the Vatican curia.

This is an original work based on new archival research and the first monograph to study Cardinal Isidore in his many diverse roles. His contributions to the events of the first six decades of the quattrocento are important for the study of major Church councils and the fall of Constantinople to the Ottoman Turks. Isidore played a crucial role in each of these events.

Marios Philippides is Professor of Classics, Emeritus at the University of Massachusetts, Amherst, USA. He has published numerous articles on the fall of Constantinople, 1453, on late Byzantine and early post-Byzantine historiography, and on the Palaiologan era. He has authored numerous books and two books with Walter K. Hanak.

Walter K. Hanak was Professor of History, Emeritus at Shepherd University, Shepherdstown, West Virginia, USA. He was the editor and publisher of the scholarly journal Byzantine Studies/Etudes Byzantines for many decades. He has published numerous articles on medieval Greece, Russia, and the Slavonic word. He was the author of a number of books and collaborated with Marios Philippides in the publication of two books.