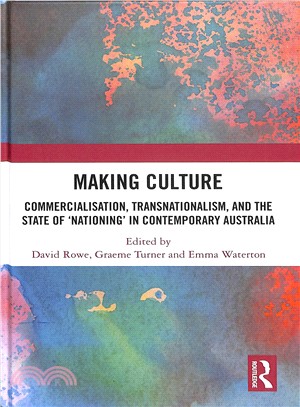 Making Culture provides an in-depth discussion of Australia’s relationship between the building of national cultural identity – or ‘nationing’ – and the country’s cultural production and consumption. With the 1994 national cultural policy Creative Nation as a starting point for many of the essays included in this collection, the book investigates transformations within Australia’s various cultural fields, exploring the implications of nationing and the gradual movement away from it. Underlying these analyses are the key questions and contradictions confronting any modern nation-state that seeks to develop and defend a national culture while embracing the transnational and the global.

Including topics such as Australia’s publishing industry, rugby, the music industry, tourism, Indigeneity and the influence of digital technology and output, Making Culture is an essential volume for students and scholars within Australian and Cultural studies.

David Rowe FAHA, FASSA is Emeritus Professor of Cultural Research in the Institute for Culture and Society, Western Sydney University. Internationally recognised for his extensive and influential publications on sport, media and popular culture, his most recent books are Global Media Sport: Flows, Forms and Futures (2011), Sport Beyond Television: The Internet, Digital Media, and the Rise of Networked Media Sport (2012), and Digital Media Sport: Technology, Power and Culture in the Network Society (2012) (both with Brett Hutchins) and (with Jay Scherer) Sport, Public Broadcasting, and Cultural Citizenship: Signal Lost? (2014).

is Emeritus Professor of Cultural Studies in the Institute for Advanced Studies in the Humanities, at the University of Queensland. He has published 24 books in film, media, communications and cultural studies, and his work has been translated into ten languages. One of the founding figures in media and cultural studies in Australia and internationally, his primary research interests over the last decade have been focused on television and new media in the post-broadcast and digital era. His most recent books include Re-Inventing the Media (2016), Television Histories in Asia: Issues and Contexts (co-edited with Jinna Tay) (2015), a revised edition of Understanding Celebrity (2014), and Locating Television: Zones of Consumption (co-authored with Anna Cristina Pertierra) (2013)

is Associate Professor in the Geographies of Heritage at Western Sydney University. She was a Research Councils UK (RCUK) Academic Fellow at Keele University from 2006–2010 and a DECRA Fellow at WSU from 2012–2016. Her research explores the interface between heritage, identity, memory and affect in both Australian and international contexts. She has published 19 books including the monographs Politics, Policy and the Discourses of Heritage in Britain (2010, Palgrave Macmillan), Heritage, Communities and Archaeology (co-authored with Laurajane Smith; 2009, Duckworth) and The Semiotics of Heritage Tourism (co-authored with Steve Watson; 2014, Channel View Publications).
PrevNext