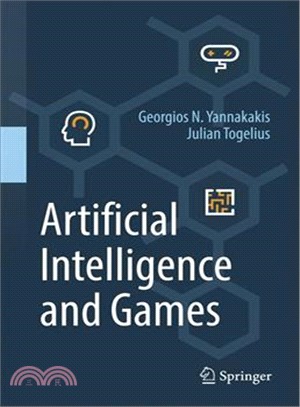 This is the first textbook dedicated to explaining how artificial intelligence (AI) techniques can be used in and for games. After introductory chapters that explain the background and key techniques in AI and games, the authors explain how to use AI to play games, to generate content for games and to model players.

The book will be suitable for undergraduate and graduate courses in games, artificial intelligence, design, human-computer interaction, and computational intelligence, and also for self-study by industrial game developers and practitioners. The authors have developed a website (http://www.gameaibook.org) that complements the material covered in the book with up-to-date exercises, lecture slides and reading.

Georgios N. Yannakakis is an Associate Professor at the Institute of Digital Games, University of Malta (UoM). He received his Ph.D. in informatics from the University of Edinburgh in 2006. He was previously an Associate Professor at the Center for Computer Games Research at the IT University of Copenhagen. His research lies at the crossroads of artificial intelligence, computational creativity, affective computing, and human-computer interaction with an emphasis on the domain of games.  He has published over 200 journal and conference papers in the aforementioned fields, his research has been supported by numerous national and European grants, and it has been featured in Science Magazine and New Scientist among other publications. He is an associate editor of the IEEE Trans. on Computational Intelligence and AI in Games and was an associate editor of the IEEE Trans. on Affective Computing (2009-2016). He was the general chair of related key conferences such as IEEE CIG (Computational Intelligence and Games) and Foundations of Digital Games (FDG).

Julian Togelius is an Associate Professor in the Dept. of Computer Science and Engineering of New York University, and a codirector of the NYU Game Innovation Lab. He was previously an Associate Professor at the Center for Computer Games Research, IT University of Copenhagen. He works on all aspects of computational intelligence and games and on selected topics in evolutionary computation and evolutionary reinforcement learning. His current main research directions involve search-based procedural content generation, game adaptation through player modelling, automatic game design, and fair and relevant benchmarking of game AI through competitions. He is the Editor-in-Chief of the IEEE Transactions on Games.