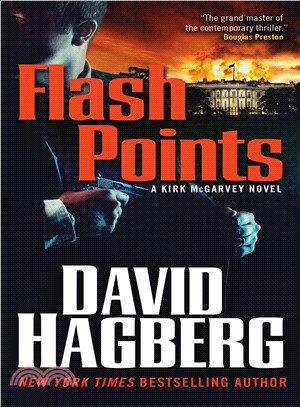 The novel begins just after the US presidential election, when a man of Trump's stripe wins. Determined to push him out of office, members of the president's staff hire an assassin to set up three terrorist attacks in the US. Meanwhile, a Pentagon general contacts mid-level intelligence operatives in fifteen different countries, concocting a plot in which the president will be faced with supposed attacks along flash points, places where trouble could easily erupt into an all out nuclear war: Pakistan/India; China/Taiwan; North vs South Korea; Russia/Ukraine.

The idea is to overwhelm the new president so that he could not possibly make the right decisions. Dangerous, but the effect would cause the public to demand that Congress impeach him.

In order for their plots to succeed, both groups must first eliminate the one man who could possibly stop them: retired CIA assassin Kirk McGarvey.

David Hagberg is a New York Times bestselling author who has published numerous novels of suspense, including his bestselling thrillers featuring former CIA director Kirk McGarvey, which include Abyss, The Cabal, The Expediter, and Allah’s Scorpion. He has earned a nomination for the American Book Award, three nominations for the Mystery Writers of America Edgar Allan Poe Award and three Mystery Scene Best American Mystery awards. He has spent more than thirty years researching and studying US-Soviet relations during the Cold War. Hagberg joined the Air Force out of high school, and during the height of the Cold War, he served as an Air Force cryptographer. He attended the University of Maryland and University of Wisconsin. Born in Duluth, Minnesota, he now lives with his wife Laurie in Sarasota, Florida.
PrevNext