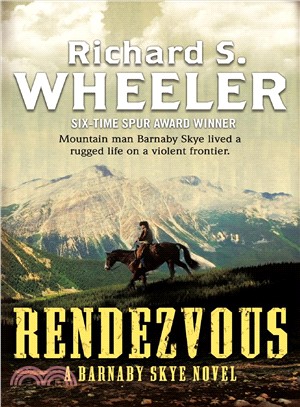 Richard S. Wheeler, multiple Spur Award-winning author and recipient of the Owen Wister Lifetime Achievement Award, presents a Skye's West adventure with Rendezvous--the story of a young man journeying across the untamed western frontier to forge his own identity and destiny.

Barnaby Skye, a pressed seaman in the Royal Navy, jumps ship at Fort Vancouver in 1826 with little more than the clothes on his back and a belaying pin for a weapon. Fighting for life, starving, hiding from his pursuers--the Hudson's Bay Company and the British Navy--he follows the Columbia River inland toward a fate he never anticipated.

In a trapping brigade, Skye falls in with legendary mountain men such as Jim Bridger and Tom "Broken Hand" Fitzpatrick and in the fabled Rocky Mountains finds another unexpected turn in his life when he meets the Crow maiden, Many Quill Woman, who will become his wife.

Richard S. Wheeler has written over fifty novels and several short stories. He has won six Spur Awards (for Fool's Coach, Sierra, Masterson, Drum's Ring, Vengeance Valley, and The Canyon of Bones) and the Owen Wister Award for lifetime achievement in the field of western literature.

Wheeler lives in the literary and film community of Livingston, Montana, and is married to Professor Sue Hart, of Montana State University-Billings. Before turning to fiction he was a newsman and book editor. He has raised horses and been a wrangler at an Arizona dude ranch.