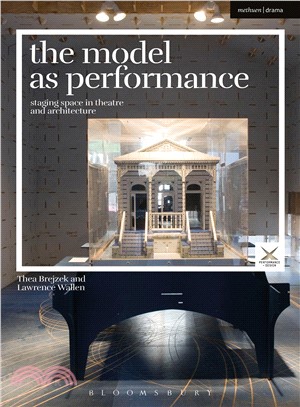 The Model as Performance investigates the history and development of the scale model from the Renaissance to the present from a scenographic perspective and a performative paradigm that explores what the model can do and how it is used in theatre and architecture. It provides a comprehensive historical context and theoretical framework for theatre scholars, scenographers, artists and architects interested in the model's reality-producing capacity and its recent emergence in contemporary art practice and exhibition. For the undergraduate student, it provides a historical survey of the model, and to the postgraduate student, it opens up a new methodological approach.

Introducing a typology of the scale model beyond the iterative and the representative model, the authors identify the autonomous model as a provocative construction between past and present, idea and reality that challenges and redefines the relationship between object, viewer and environment. Case studies include Brunelleschi's dome models and Bel Geddes' Futurama, Mies van der Rohe's mock ups and Zumthor's atmospheric models, Anna Viebrock's life size boxes and Herzog & de Meuron's miniature styrofoam exhibits.

Thea Brejzek (PhD, Mphil) is Professor for Spatial Theory at the University of Technology Sydney, Australia, and an internationally recognised expert in scenography. In 2011, she was the founding Curator for Theory at the Prague Quadrennial for Performance Design and Space (PQ). Recently, she has been a Visiting Professor at Bartlett School of Architecture, UK, and has been appointed to the international scientific advisory board of the Bauhaus, Dessau.

Lawrence Wallen (PhD, MArch, BArch) is Professor and Head of School of Design at the University of Technology Sydney, Australia. From 2001-12 he was Professor of Scenography at the Zurich University of the Arts. A trained visual artist and architect, his research and practice is concerned with representation of space, spatial narrative and postcolonial readings of landscape.