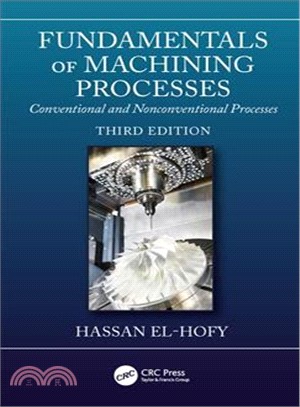 Written by an expert with over 40 years of experience in research and teaching machining and related topics, this new edition textbook presents the principles and theories of material removal and applications for conventional and nonconventional machining processes. The new edition is ideal for undergraduate students in production, materials, industrial, mechatronics, marine, mechanical, and manufacturing engineering programs, and also useful for graduate programs related to higher-level machining topics, as well as professional engineers and technicians. All chapters will be updated, with 4 new chapters added.

Professor Hassan El-Hofy was born on February 9, 1953, in Egypt. He received a B. Sc Honors degree in Production Engineering from Alexandria University (Egypt) in 1976, and then served as a teaching assistant in the same department and received a Master of Science in Production Engineering from Alexandria University in 1979. Professor El-Hofy has had a successful University career in education, training, and research. Following M. Sc, he worked as an assistant lecturer until October 1980 when he left to Aberdeen University in Scotland and began his Ph D work with Professor J. McGeough in hybrid machining processes. He won the Overseas Research Student (ORS) Award during the doctoral degree that has been completed in 1985. He came back to Alexandria University and resumed his work as an assistant professor. In 1990 he was promoted to an associate professor in. He was on leave as a visiting professor for Al-Fateh University in Tripoli between 1989 and 1994.

In July 1994, Professor El-Hofy returned to Alexandria University and in November 1997 he was promoted to a full professor. In September 2000 he was selected to work as a professor in the University of Qatar.  He chaired the accreditation committee for mechanical engineering program toward ABET Substantial Equivalency Recognition that has been granted to the College of Engineering programs in 2005. Due to his role in that event, he received Qatar University Award and a certificate of appreciation.

Between August, 2007, and August 2010 he was the chairman of the Department of Production Engineering, College of Engineering of Alexandria University where he was teaching several machining and related technology courses.  In October 2011 he was nominated as the vice dean for education and student's affairs at the college of Engineering, Alexandria University. In December 2012 he became the dean of the School of Innovative Design Engineering at Egypt-Japan University of Science and Technology (E-JUST) in Alexandria, Egypt. At the same time he was a professor of machining at the Department of Industrial Engineering and Systems Management at E-JUST. He worked as the acting vice president of research from December 2014 to April 2017 at E-JUST.