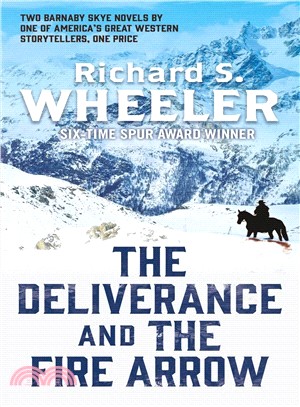 The Deliverance and The Fire Arrow are two Skye's West novels by one of America’s greatest Western storytellers, Richard S. Wheeler, at one price.

Barnaby Skye—trapper, guide, and magnet for adventure—and his Crow wife, Victoria, agree to help a mysterious Cheyenne woman on the Mexican frontier locate her two children; they were kidnapped by Ute Native Americans several years before and sold into bondage in Mexico. This impossible, dangerous, and foolhardy mission takes the three to Santa Fe and Taos, and into a strange association with an eccentric Texas adventurer who agrees to help them—for reasons of his own.

When Blackfeet raiders attack Barnaby Skye and his wife Victoria in the midst of a cruel winter in the Rockies, the two are stranded in their frozen camp with no horses and little food. To save Victoria’s life, they must travel toward her home on the Musselshell River. But their journey is interrupted by a party of renegade white men with a wagonload of cheap and poisonous whiskey they intend to trade to the Native Americans—including Victoria’s people, the Crow. Skye is forced to assist the outlaws, but all the while, he plots to ruin their deadly enterprise.

Richard S. Wheeler is the author of more than fifty novels of the American West. He holds six Spur Awards and the Owen Wister Award for lifetime contribution to the literature of the West. He makes his home in Livingston, Montana, near Yellowstone National Park.

Richard's Skye West novels include The Far Tribes, The Canyon of Bones, and Going Home.