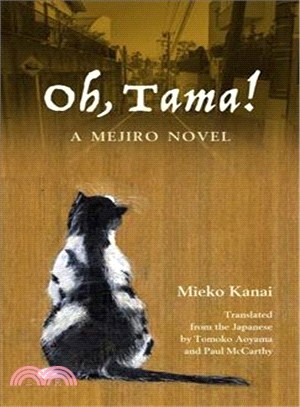 Oh, Tama! describes the haphazard lives of Natsuyuki Kanemitsu and his loosely connected circle of dysfunctional acquaintances and family. Natsuyuki is prevailed upon by his friend Alexandre, an occasional porn-film actor, to adopt the very pregnant cat Tama, who gives birth and remains throughout the novel as a silent observer of her human hosts. Further complications arise surrounding the mystery of who the father of Alexandre's sister Tsuneko's unborn child is, with Tsuneko (a bar owner) happy to collect money from anyone who may be responsible. One of these possible dads turns out to be Natsuyuki's half-brother, abandoned and forgotten long ago as easily as Tama has parted with her kittens. A "fast and comedic novel," Oh, Tama! plays out against a backdrop of cramped apartments and cheap food and drink where everyone seems to have an opinion on film, photography, and fashionable French art theory. It is part of the author's esteemed series of "Mejiro" novels, named after the northwest area of Tokyo that so richly informs their urbanity and outlook.

Author Mieko Kanai (b. 1947) is a prominent Japanese writer and essayist, and an admired reviewer of books and film, known for her scathing and perceptive wit.She read widely in fiction and poetry from an early age. In 1968 she received the Gendaishi Techo Prize for poetry. In 1979 she received the Izumi Kyoka Prize, and in 1998 the current work, Oh, Tama! (Tama ya), received the Women's Literature Award. She has a devoted following in Japan and has built up her own world of fiction with a sensual style.

Translator Tomoko Aoyama (BA Ochanomizu University; MA Tokyo University of Foreign Studies; PhD University of Queensland) is Senior Lecturer in Japanese at the University of Queensland, Australia. Her recent publications include Reading Food in Modern Japanese Literature (University of Hawai'i Press, 2008) and Girl Reading Girl in Japan, co-edited with Barbara Hartley (Routledge, 2010). She also guest edited the special issues of Asian Studies Review vol. 32, no. 3, 2008 on "The Girl, the Body, and the Nation in Japan and the Pacific Rim", and US-Japan Women's Journal (with Hiromi Tsuchiya Dollase and Satoko Kan) no. 38 2010 on "Shojo Manga: Past, Present and Future". She was awarded the Asian Studies Association of Australia's Mid-career Researcher Prize for Excellence in Asian Studies (2010) and the Inaugural Inoue Yasushi Award for Outstanding Research in Japanese Literature in Australia (2007). She has translated in collaboration with Barbara Hartley Kanai Mieko's novel Indian Summer (Cornell East Asia Series) and a number of critical essays and short stories by Mishima Yukio, Shibusawa Tatsuhiko, Honda Masuko and others.

Translator Paul McCarthy, double-majored in English Literature and Japanese as an undergraduate at the University of Minnesota, and then took an AM and PhD in Japanese Literature at Harvard University (1975). He has taught Japanese Literature at universities in the United States, and Comparative Literature at universities in Japan and Korea for the past forty years. McCarthy has already translated another of Mieko Kanai's novels, The Word Book, and also The Moon Over the Mountain & Other Stories, by Atsushi Nakajima, both for the JLPP program. Other of his translated works are Jun'ichiro Tanizaki's memoir Childhood Years, his short stories The Gourmet Club, and his novel A Cat, a Man and Two Women, which won the US-Japan Friendship Commission Translation Prize. He has also translated Takeshi Umehara's Lotus and Other Tales of Medieval Japan, and Zenno Ishigami's Disciples of the Buddha.