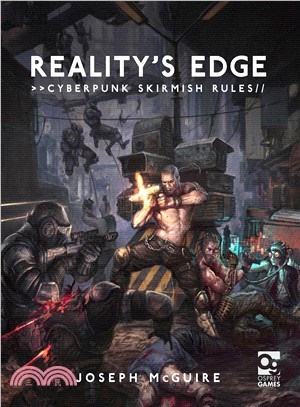 Hyper-reality. The area between the thriving mass of humanity known as the Sprawl and the digital refuge of Cyberspace. This is your playground. As a data-jack, you can see and manipulate the flow of digital data through the real world -- for you, reality is limitless.

Welcome to Reality's Edge, a wargame so shiny you are going to need mirror shades. Set in a dystopian cyberpunk future, players take on the role of a data-jack, a mercenary hacker who leads a small team of trusted operatives and disposable freelancers. Funded by shadow backers, the data-jacks accept jobs from faceless clients for profit, glory, and better chrome . . . always better chrome.

Battles take place in the concrete jungle known as the Sprawl, but data-jacks must remain wary of the threat posed by Cyberspace. Hacking rules are pivotal to the game, with data nodes, robots, machines, and even enemy chrome presenting potential targets for a cunning data-jack. No-one plugged into Cyberspace is entirely safe from intrusion, and the electronic sprites and digital djinn you can deploy alongside your team can be just as dangerous as any mercenary or assassin.

Gameplay focuses on individual characters, with each skirmish offering you the opportunity to earn experience and equipment for your data-jack and operatives. A wide range of items and upgrades are available, from advanced weaponry and synthetics through to cyber-implants, biological enhancements, clones, and much more. This is a world obsessed with whether something can be done, not whether it should.

Joey McGuire is the President and Head Janitor of World's End Publishing, and is the author of This Is Not a Test. A geek and long-time gamer, Joey got into the miniatures hobby after entering a gaming store in 1997 and discovering the Games Workshop product catalog. Since that auspicious day, Joey has been modelling and painting miniatures, building terrain, and writing his own rules. This Is Not a Test was his first solo publication, but he has also worked on several other projects, both personal and for Rattrap Productions. Currently residing in Maryland, Joey is also a devoted husband, proud father, and a humble civil servant by day.
PrevNext