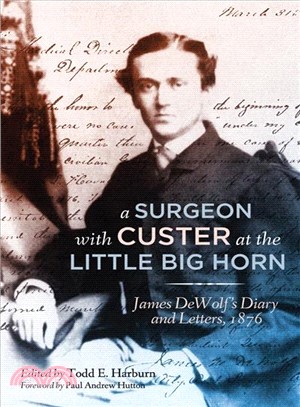 In spring 1876 a physician named James Madison DeWolf accepted the assignment of contract surgeon for the Seventh Cavalry, becoming one of three surgeons who accompanied Custer’s battalion at the Battle of the Little Big Horn. Killed in the early stages of the battle, he might easily have become a mere footnote in the many chronicles of this epic campaign—but he left behind an eyewitness account in his diary and correspondence. A Surgeon with Custer at the Little Big Horn is the first annotated edition of these rare accounts since 1958, and the most complete treatment to date.

While researchers have known of DeWolf’s diary for many years, few details have surfaced about the man himself. In A Surgeon with Custer at the Little Big Horn, Todd E. Harburn bridges this gap, providing a detailed biography of DeWolf as well as extensive editorial insight into his writings. As one of the most highly educated men who traveled with Custer, the surgeon was well equipped to compose articulate descriptions of the 1876 campaign against the Indians, a fateful journey that began for him at Fort Lincoln, Dakota Territory, and ended on the battlefield in eastern Montana Territory. In letters to his beloved wife, Fannie, and in diary entries—reproduced in this volume exactly as he wrote them—DeWolf describes the terrain, weather conditions, and medical needs that he and his companions encountered along the way.

After DeWolf’s death, his colleague Dr. Henry Porter, who survived the conflict, retrieved his diary and sent it to DeWolf’s widow. Later, the DeWolf family donated it to the Little Bighorn Battlefield National Monument. Now available in this accessible and fully annotated format, the diary, along with the DeWolf’s personal correspondence, serves as a unique primary resource for information about the Little Big Horn campaign and medical practices on the western frontier.