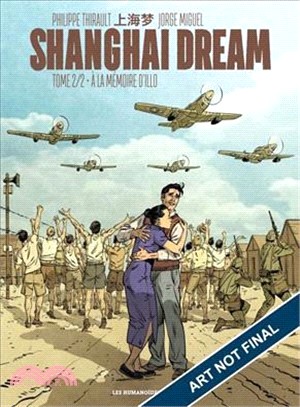 A young German Jewish filmmaker escapes the Nazi threat in Shanghai, where he is forced to adapt to a new land and cope with familial loss through the magic of filmmaking. In 1938 Berlin, aspiring filmmaker Bernard Hersch works at the UFA studios and dreams of one day directing the screenplay he and his wife are writing. But as a Jew in Hitler’s Germany, Bernard faces increasing danger and discrimination, and is soon forced to accept deportation to Japan as his only hope. At the last minute, Bernard’s wife is killed by the Nazis and he is rerouted to China. Heartbroken, he struggles through grief and vows to bring his wife’s screenplay to life. A distinctive and humanistic take on World War Two from the largely undocumented Chinese perspective.
Philippe Thirault is a French novelist and comics writer who was born in Paris in 1967. In the late 1990s, he published the novel Feathered Serpent, the trilogy Hemoglobin Blues, and his first comic series, the critically acclaimed Miss: Better Living Through Crime. He has since become a very prolific comic book creator, writing series such as Thousand Faces, The Hounds of Hell, Balkans Arena and Mandalay. He often writes stories with a historical or fantastic setting and runs writing workshops in Paris.

Jorge Miguel was born in 1963, in Amadora, Portugal. He started as an illustrator and storyboard writer, but later turned to cartoons and printmaking. Later, watercolor became his favorite technique. At the Platano publisher, he made the comics Camoes and O Fado Ilustrado. At Les Humanoides Associes, he began by illustrating the comedy series The Z Word, written by Jerry Frissen. He then illustrted the thriller, Balkans Arena, a one-shot comic with Philippe Thirault. Most recently, he drew the first volume of the concept series Seul Survivant (Sole Survivor) before tackling in 2016 the graphic adaptation of Julia Verlanger's novel La Croix des Decastes with Corbeyran in the screenplay. Jorge currently lives in Portugal.?