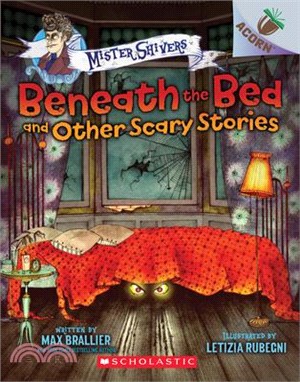 This series is part of Scholastic's early reader line, Acorn, aimed at children who are learning to read. With easy-to-read text, a short-story format, and full-color artwork on every spread, these books will boost reading confidence and fluency. Acorn books plant a love of reading and help readers grow!

What is hiding under the bed? What is scratching at the window? Find out in New York Times bestselling author Max Brallier's scary stories collection. These five spine-chilling stories will have beginning readers everywhere begging to stay up late to read (with the light on!). With authentically scary, easy-to-read text and creepy, full-color artwork throughout, this book is perfect for young children who crave lite scares. This is also THE book to share at sleepovers or around a campfire. It will send SHIVERS down your spine!
Max Brallier is the author of more than twenty books for children, including the Galactic Hot Dogs, and The Last Kids on Earth middle-grade series. Under the pen name Jack Chabert, he is the creator and author of the Eerie Elementary series with Scholastic Branches. Max lives in New York City with his wife and daughter.

Letizia Rubegni is a children's book illustrator who aims to create a well-balanced mixture of darkness, grotesque, and humor in her artwork. From a very early age, she fell in love with storytelling through pictures. After graduating in Scenography from the Academy of Fine Arts in Florence, Letizia gained further qualifications as a Television Cartoonist and Graphic Designer. Letizia lives in Tuscany, Italy.
PrevNext