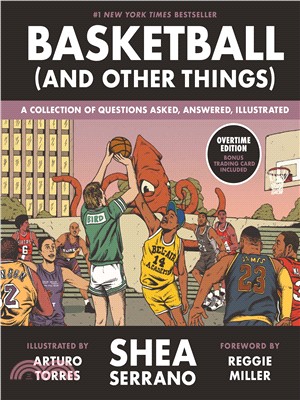 Every basketball question you’ve ever wanted answered, from the wild mind of author Shea Serrano

Any fan of Shea Serrano’s unconventional, hilarious, and insightful writing will want to add this hardcover edition of his wildly popular Basketball (and Other Things) to their collection. The book will feature a new cover and two new chapters as well as removable art that showcases Serrano’s trademark creativity and Arturo Torres’s inimitable illustration style. First released as a paperback in 2017, the book went on to become a #1 New York Times bestseller. This edition will be a keepsake for Serrano fans and basketball fans alike.
Who is the greatest dunker of all time? Which version of the Michael Jordan was the best Michael Jordan? What is allowed and absolutely not allowed in a game of pickup basketball? Basketball (and Other Things) presents readers with a whole new set of pivotal and ridiculous fan disputes from basketball history, providing arguments and answers, explained with the wit and wisdom that is unique to Shea Serrano. Serrano breaks down debates that NBA fans didn’t even know they needed, from the classic (How many years during his career was Kobe Bryant actually the best player in the league?) to the fantastical (If you could assign different values to different shots throughout basketball history, what would they be and why?). With incredible art from Arturo Torres, this book is a must-have for anyone who has ever stayed up late into the night debating basketball’s greatest moments, what-ifs, stories, and legends, or for those who are discovering the mythology of basketball for the first time.
PrevNext