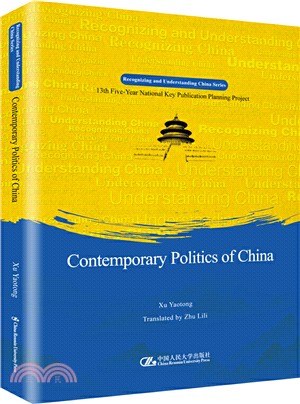 Based on China’s national conditions， this book introduced China’s contemporary political ideology， political system reform， basic political system， political leadership and direction and goal of political development orientated by essential political problems. By expounding the system of people’s congresses， multi-party cooperation and political consultation system under the leadership of the CPC， regional ethnic autonomy system， the system of self-governance at the primary level and the development of theory and practice of democratic politics， the author comprehensively presented readers the basic situation of contemporary politics of China and its political characteristics and advantages.

Xu Yaotong, professor and doctoral tutor at National Academy of Governance, vice director of China Society of Administrative Reform and Chinese Association of Scientific Socialism. He is an expert of the Review Panel for National Social Science Fund Project and Marxist Theory Research and Developing Project, enjoying special government allowance of the state council. As a guest professor and tutor of doctoral candidates majoring in western political theory and methods in School of Government Peking University, he’s been specializing in the politics principle and method, theory and practice of socialism, China’s political and administrative system reform, political civilization and democratic politics development, the CPC construction and intraparty democracy development. He is the author of more than 20 publications and 500 articles including The Nature and Characteristics of Socialism, Marxist Cadre Theory and Practice, Ideas for A New World: Utopian Socialist Analysis, China’s Basic National Conditions and Development Strategy, Political Civilization Construction and Democratic Politics Development, History of Western Politics, Politics, China’s Basic Political System, Study on New Characteristics of Chinese Politics, Overview of Modernization of Chinas National Governance System.
CONTENTS

Chapter 2The System of People?s Congresses

Chapter 3
Multi?party Cooperation and Political Consultation System under the Leadership of the Communist Party of China

Chapter 5The Development of Democracy

Chapter 6The System of Self?governance at the Primary Level

Chapter 7The Communist Party of China Is the Ruling Party

It has four specific systems as economic structure, political structure, cultural structure and social structure. Adhering to the system of socialism with Chinese characteristics, we should combine the fundamental and basic political systems with specific systems, national level democracy with the grassroots democracy, and insist on combining the leadership of the CPC, the running of the country by the people,and law?based governance. It should be noted that the system of socialism with Chinese characteristics is distinctive and efficient, but it still needs to
be constantly improved to provide a more effective institutional guarantee for the victory of socialism with Chinese characteristics.
4. Following marxism political theory
In order to observe and understand contemporary politics of China, we should pay attention to a remarkable feature, that is, contemporary politics of China is guided by Marxism and follows Marxism political theory. The founders of Marxism are Marx and Engels, and Marxism political theory elucidated by Marx and Engels constitutes the mainstream trend of thoughts in contemporary politics of China. Starting from the world outlook of dialectical materialism and historical materialism, Marxism political theory scientifically reveals the nature, characteristics and development regularity of politics. Dialectical materialism believes that the world is made of matter moving regularly, so it follows certain laws. Historical materialism holds that social existence determines social consciousness, and social consciousness reacts on social existence. Productive forces determine the relations of production, and that the relations of production react on productive forces. The basic contradictions of society, namely the contradiction between the productive forces and the relations of production, and the contradiction between economic foundation and the superstructure, promote the development of human society from the lower level to the higher level, which successively passed through the primitive society, the slave society, the feudal society, the capitalist society, to the socialist society and the communist society. From a historical view of the world, Marxism political theory holds that, on the one hand, political consciousness is the reflection of political existence, and political existence determines political consciousness. On the other hand, political consciousness can actively react on political existence. The development of Marxism political theory in practice also includes later Leninism, Mao Zedong Thought and the theoretical system of socialism with Chinese characteristics. Marxism political theory puts forward the following main views.
Firstly, politics is about the management of public institutions and public affairs. Marx and Engels held that: “With the emergence of cities, there is a need of executive branch, police, taxation, etc. In a word, there is a need of a public political institution, that is, general politics is required.” Public political institution has two basic functions
MARX, ENGELS. Complete Works of Marx and Engels: Volume 3. Beijing: People?s Publishing House,1960:57.:First, in the state where people are divided into different classes, it has the function of class ruling;Second, it has the function of managing social public affairs. Just as Engels said,“Political rule is based on the implementation of certain social functions, and it works when implemented. No matter how many governments have risen or declined in Persia and India, they all know very well that they should firstly manage to irrigate by rivers, because they can?t develop agriculture without irrigation.”MARX, ENGELS. Complete Works of Marx and Engels: Volume 20. Beijing: People?s Publishing House,1971:195.If the public political institutions do not organize and manage hydraulic engineering and other public constructions, the ruling class cannot maintain the power. When ruling class ceases its governance, public political institutions will still retain the function of managing social public affairs, which shows that politics is public and arises from the general needs of society and people. Political activities will be accompanied by human society. As long as human society exists, public affairs will exist, and public institutions will be needed. It is the same to politics.
Secondly, the core of politics is the state power. In a class society, public political institutions are manifested in the form of the state. If a class is to gain, maintain and consolidate its political rule, it must control the state power and the armed forces. Lenin once pointed out that “the essence of politics is the institution of state power”
LENIN. Selected Works of Lenin: Volume 2. 3rd.Beijing: People?s Publishing House,1995:323. , and the state is “the key and fundamental of all politics”

LENIN.Complete Works of Lenin:Volumn 4.Beijing:People?s Publishing House,1958:429.. As the core of the superstructure, state power is the most concentrated place of social and political activities. In a state, all political activities, relations, and phenomena are related to state power and take it as the center. Political factors as class, Party, organization, struggle, revolution and compromise are also carried out around state power. Only the ruling class can systematically promote the politics. Therefore, Lenin pointed out that “the function of politics is to deal with state affairs, set the direction and determine the task content”
LENIN. Complete Works of Lenin: Volume 31. 2nd.Beijing: People?s Publishing House,1985:128. .
Thirdly, politics is concentrated reflection of economy. Politics is closely related to economy. Politics is based on economy and in turn serves economy. Marxism believes that politics is rooted in the relations of production, and political relations are ultimately determined by specific economic relations in a certain society. “Certain individuals who carry out production activities in a certain way would create certain social and political relations.
MARX, ENGELS. Selected Works of Marx and Engels: Volume 1. 3rd.Beijing: People?s Publishing House,2012:151. ”“The mode of the production of material restricts the progress of social, political and spiritual life.”MARX, ENGELS. Selected Works of Marx and Engels: Volume 2. 3rd.Beijing: People?s Publishing House,2012:2. That is to say, economic relations determine political relations. However, political relations are not negative reflection of economic relations, but have a huge positive, dynamic reaction. Just as Lenin once said, “politics is the concentrated reflection of economy”LENIN. Selected Works of Lenin: Volume 4. 3rd. Beijing: People?s Publishing House,1995:407. .The so?called concentrated reflection means that politics reflects the fundamental interests of the ruling class in economic relations. The solution of the problems of fundamental economic relations cannot be based on economy alone, but also on political relations. In a class society, the only way to solve the problems of the fundamental economic interests of the working class is to carry out class struggle and seize the political power of the state. As Lenin once said, “politics must take the first place when compared with economy…. A class cannot maintain its ruling power without holding political point of view.”Ibid., 407408. In a socialist society, the solutions to problems in economic and cultural development concerned with fundamental interests of the people, as well as those incompatible problems between economic foundation and the superstructure, must be drawn under the guidance of guaranteeing the state?s interests by political restructure.
Fourthly, the key to politics lies in institutions. As superstructure, it is built on certain economic basis. Marxism historical materialism points out that the driving force for social progress is the contradictory between productive forces and the relations of production, and that between economic foundation and the superstructure. Productive forces determine the relations of production. As economic basis of the society, the relations of production determine the superstructure in return. The productive forces determine the relations of production and economic base determines the superstructure and cultural ideology. The structure of a country and society is mainly divided into three parts as economy, politics and culture.It has established the national economic structure, political structure and cultural structure corresponding to the productive forces and economic foundation. Historical materialism also holds that the economic structure, political structure and cultural structure, as the superstructure of the state, are counterproductive to the economic foundation and productive forces. The national superstructure and its systems, which represent the fundamental requirement and direction of the advancement of economic foundation and productive forces, can effectively promote the development of economic foundation and productive forces.
Fifthly, politics has objective regularity. Lenin pointed out, “politics is a kind of science and art”
LENIN. Selected Works of Lenin: Volume 4.3rd. Beijing: People?s Publishing House,1995:189..Politics is an objective social phenomenon. Its emergence and development are not accidental or blind, but restricted by social material production conditions, and has its own objective and inherent laws. Through social practice, people can constantly reveal, understand and grasp the objective laws of politics. So politics is a kind of science. Related to the fundamental interests of the ruling class, politics is concerned with social life, political environment and the complexity of political situation. People can?t put political objective laws into practice as certain ready?made formula. We should analyze the situation, seize the opportunity, and adjust to local conditions to use political rules more flexibly and actively, in order to make correct strategic decisions to adapt to the needs of political struggle. Therefore, politics is a kind of art.
5. The focus and goal of the development of contemporary politics of China