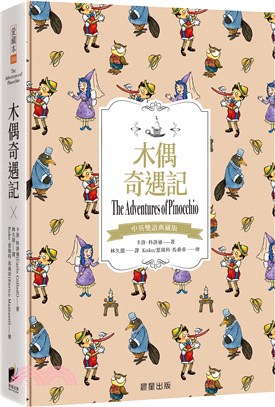 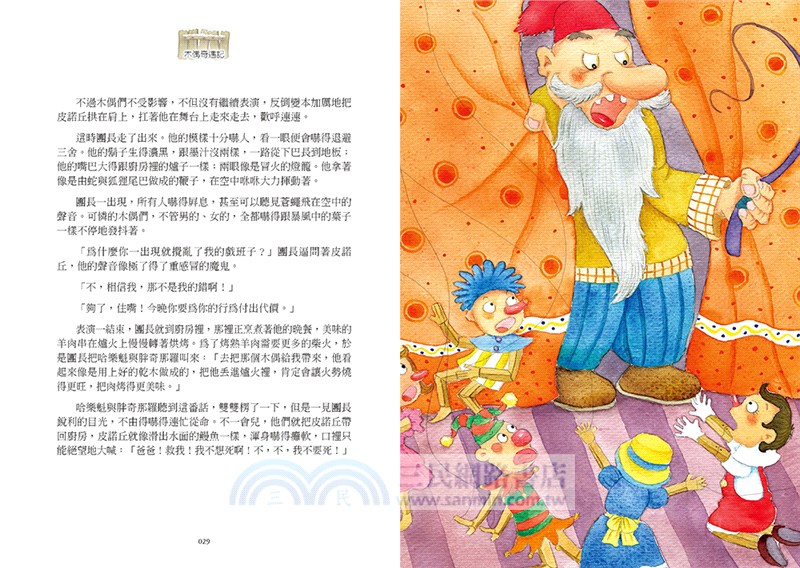 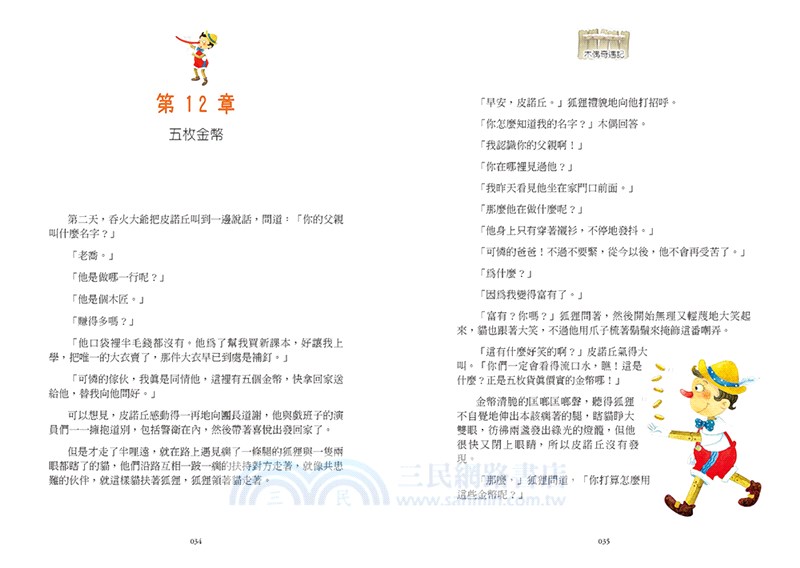 1.A Wood That Laughs and Cries
2.A Puppet that Can Turn Somersaults
3.The First Pranks of the Puppet, Pinocchio
4.The Talking Cricket
5.The Omelet Flies Out of the Window
6.Pinocchio's Feet Got Burned off
7.Geppetto Returns Home
8.A New Pair of Feet and A-B-C Book
9.Pinocchio Sells His A-B-C Book
10.Great Puppet Theater
11.Fire Eater
12.Five Gold Pieces
13.The Inn of the Red Lobster
14.The Assassins
15.Dying
16.The Lovely Maiden with Azure
17.Pinocchio Takes Medicine
18.The Fox and the Cat
19.Pinocchio is Robbed
20.Pinocchio Meets a Serpent
21.Pinocchio, a Watchdog for Chicken Coop
22.Pinocchio Discovers the Thieves
23.Father in the Sea
24.The Island of the Busy Bees
25.Pinocchio's Promises
26.Skip the Class
27.The Great Battle
28.Being Fried in a Pan Like a Fish
29.Make a Wish
30.The Land of Toys
31.A Great Surprise
32.Pinocchio Becomes a Donkey
33.Circus
34.Becomes a Puppet Once More
35.Reunion
36.Becomes a Boy

1. A Wood That Laughs and Cries

There was once upon a time...
"A king!" my little readers will instantly exclaim.
No, children, you are mistaken. There was once upon a time a piece of wood. This wood was not valuable; it was only a common log like those that are burned in winter in the stoves and fireplaces to make a cheerful blaze and warm the rooms.
One fine day, this piece of wood was lying in the shop of an old
carpenter of the name of Master Antonio. He was, however, called by everybody Master Cherry, on account of the end of his nose, which was always as red and polished as a ripe cherry.
No sooner had Master Cherry set eyes on the piece of wood than his face beamed with delight; and, rubbing his hands together with satisfaction, he said softly to himself:
"This wood has come at the right moment; it will just do to make the leg of a little table."
Having said this, he immediately took a sharp ax with which to remove the bark and the rough surface. Just, however, as he was going to give the first stroke he remained with his arm suspended in the air, for he heard a very small voice saying imploringly, "Do not strike me so hard!"
He turned his terrified eyes about the room to try to discover where the little voice could possibly have come from, but he saw nobody! He looked under the bench—nobody; he looked into a cupboard that was always shut—nobody; he looked into a basket of shavings and sawdust—nobody; he even opened the door of the shop and gave a glance into the street—and still nobody. Who, then, could it be?
"I see how it is," he said, laughing and scratching his wig, "evidently that little voice was all my imagination. Let us set to work again."
And taking up the ax he struck a tremendous blow on the piece of wood.
"Oh! Oh! You have hurt me!" cried the same little voice dolefully.
This time Master Cherry was petrified. His eyes popped out of his head, his mouth opened wide, and his tongue hung down on his chin, like a mask on a fountain. As soon as he had recovered the use of his speech, he began to say, stuttering and trembling with fear:
"Where did that voice come from, when there is no one around? Might it be that this piece of wood has learned to weep and cry like a child? I can hardly believe it. Here it is, a piece of common firewood, good only to burn in the stove to boil a saucepan of beans. Yet might someone be hidden in it? If so, the worse for him. I'll fix him!"
With these words, he grabbed the log with both hands and started to knock it about unmercifully. He threw it to the floor, against the walls of the room, and even up to the ceiling.
He listened for the tiny voice to moan and cry. He waited two minutes—nothing; five minutes—nothing; ten minutes—nothing.
"Oh, I see," he said, trying bravely to laugh and ruffling up his wig with his hand. "It can easily be seen I only imagined I heard the tiny voice! Well, well, let us set to work again."
But the poor fellow was scared half to death, he tried to sing a gay song to give himself a little courage.
Putting the ax aside, he took his plane, to make the wood smooth and even; but whilst he drew it to and fro, he heard the same little voice giggling as it spoke:
"Stop it! Oh, stop it! Ha, ha, ha! You're tickling me all over."
This time poor Master Cherry fell down as if he had been struck by lightning. When he at last opened his eyes, he found himself sitting on the floor. His face was quite changed; fright had turned even the tip of his nose from red to deepest purple.