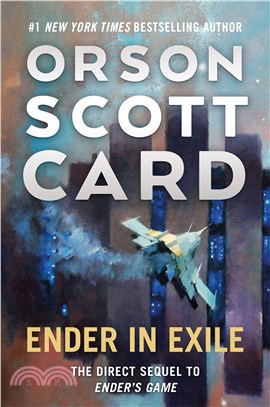 Orson Scott Card visits his most beloved character of all. Ender in Exile picks up at the end of Ender's Game, and tells the story of the first years of Ender's life after he left Earth for good. This book fits between Ender's Game and Speaker for the Dead in the series.
Tor Books is thrilled to reissue the entire Ender Universe series in uniform new packaging. Ender in Exile is a late addition to the series, and fits in sequence between Ender’s Game and Speaker for the Dead.

At the close of Ender's Game, Andrew Wiggin – called Ender by everyone – is told that he can no longer live on Earth, and he realizes that this is the truth. He has become far more than just a boy who won a game: he is the Savior of Earth, a hero, a military genius whose allegiance is sought by every nation of the newly shattered Earth Hegemony.

He is offered the choice of living in isolation on Eros, at one of the Hegemony's training facilities, but instead the twelve-year-old chooses to leave his home world and begin the long, relativistic journey out to the colonies. With him goes his sister Valentine, and the core of the artificial intelligence that will become Jane. The story of those years has never been told . . . until now.