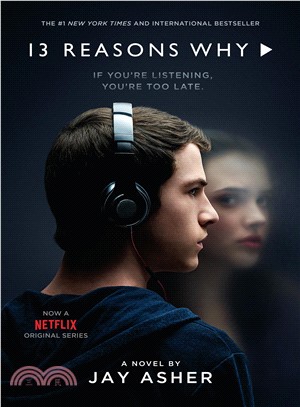 **SOON TO BE A NETFLIX ORIGINAL SERIES**

“Thirteen Reasons Why will leave you with chills long after you have finished reading.” —Amber Gibson, NPR’s “All Things Considered”


You can’t stop the future.
You can’t rewind the past.
The only way to learn the secret . . . is to press play.

Clay Jensen returns home from school to find a strange package with his name on it lying on his porch. Inside he discovers several cassette tapes recorded by Hannah Baker—his classmate and crush—who committed suicide two weeks earlier. Hannah's voice tells him that there are thirteen reasons why she decided to end her life. Clay is one of them. If he listens, he'll find out why.

Clay spends the night crisscrossing his town with Hannah as his guide. He becomes a firsthand witness to Hannah's pain, and as he follows Hannah’s recorded words throughout his town, what he discovers changes his life forever.

JAY ASHER's debut novel, Thirteen Reasons Why, a #1 New York Times and international bestseller, has sold over 3 million copies in the United States alone and is now a thirteen-part series on Netflix. The Future of Us, his second novel, was co-authored with Printz Honor winner Carolyn Mackler. He is also the author of the New York Times bestselling What Light. Piper, out in Fall 2017 and co-authored with Jessica Freeburg and illustrated by Jeff Stokely, will mark Asher’s graphic novel debut. His novels have been translated into thirty-seven languages. He lives with his family in California. Follow him on Twitter @jayasherguy.