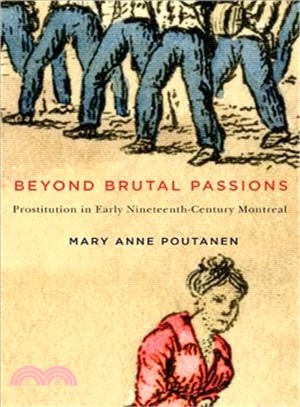 During a time of significant demographic, geographic, and social transition, many women in early nineteenth-century Montreal turned to prostitution and brothel-keeping to feed, clothe, protect, and house themselves and their families. Beyond Brutal Passions is a close study of the women who were accused of marketing sex, their economic and social susceptibilities, and the strategies they employed to resist authority and assert their own agency. Referencing newspapers, parish registers, census returns, coroners' reports, city directories, documents of Catholic and Protestant institutions, police books, and court records, Mary Anne Poutanen reveals how these women confronted limited alternatives and how they fought against established authority in the pursuit of their livelihoods. She details these women’s lives not only as prostitutes but also as wives, mothers, sisters, and daughters who reconstructed the bonds of kinship and solidarity. An insightful history of prostitution, Beyond Brutal Passions explores the complicated relationships between women accused of prostitution and the society in which they lived and worked.
Mary Anne Poutanen teaches in the Department of History at Concordia University, in the Programme d'etudes sur le Quebec at McGill University, and at the McGill Institute for the Study of Canada.
PrevNext