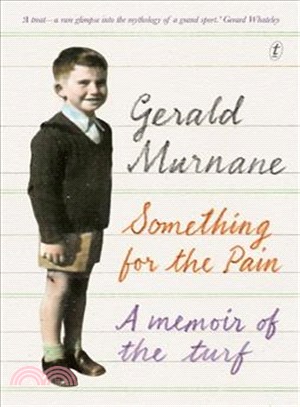 "Unquestionably one of the most original writers working in Australia today."The Australian

"Murnane, a genius, is a worthy heir to Beckett."Teju Cole

"Something for the Pain is Gerald Murnane at his best. His meticulous exploration of his lifelong obsession with horse racing is by turns hilarious, moving and profound."Andy Griffiths

Growing up in the bush, Gerald Murnane became obsessed with horse racing. He had never ridden a horse, nor seen a race, and he had no interest in gambling. Yet he was entranced by the pictures in theSporting Globe, the horses' racing colors, their namesthe incantation of them in radio broadcasts of race commentary from towns near and far. Murnane discovered in these races more than he could find in religion or philosophy. They were the gateway to a world of imagination

Murnane is like no other writer, and Something for the Pain is like no other Murnane book. In this unique and spellbinding memoir, he tells the story of his life through the lens of horse racing. It is candid, witty and movinga treat for lovers of literature and of the turf.

Gerald Murnane was born in Melbourne in 1939. His acclaimed debut novel,Tamarisk Row, was published in 1974 and was followed by nine other works of fiction, the most recent of which isA Million Windows. In 1999 Murnane won the Patrick White Award and in 2009 he won the Melbourne Prize for Literature.

Gerald Murnane was born in Melbourne in 1939. He has been a primary teacher, an editor and a university lecturer. His debut novel, Tamarisk Row (1974), was followed by nine other works of fiction, the most recent of which is A Million Windows. In 1999 Murnane won the Patrick White Award and in 2009 he won the Melbourne Prize for Literature. He lives in western Victoria.
PrevNext