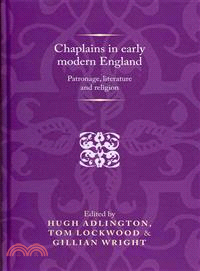 Who were early modern chaplains and what did they do? Chaplains are well known to have been pivotal figures within early modern England, their activities ranging from more conventionally religious roles (conducting church services, offering spiritual advice and instruction) to a surprisingly wide array of literary functions (writing poetry, or acting as scribes and editors). Chaplains in Early Modern England: Patronage, Literature and Religion explores the important, but often neglected, contributions made by chaplains of different kinds – royal, episcopal, noble, gentry, diplomatic – to early modern English culture. Addressing a period from the late sixteenth to the early eighteenth centuries, it focuses on chaplains from the Church of England, examining their roles in church and politics, and within both domestic and cultural life. It also shows how understanding the significance of chaplains can illuminate wider cultural practices – patronage, religious life and institutions, and literary production – in the early modern period.
Hugh Adlington is Senior Lecturer in English Literature at the University of Birmingham, UK.

Tom Lockwood is Senior Lecturer in English Literature at the University of Birmingham, UK.

Gillian Wright is Senior Lecturer in English Literature at the University of Birmingham, UK.
PrevNext