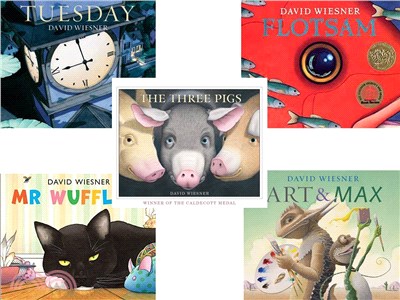 The books included are paperback editions of:

The unpredictable events of a particular Tuesday unroll before the reader with the precision and clarity of a silent movie . . . In this ingenious and imaginative – nearly wordless – picture book, frogs in a pond lift off on their lily pads and fly to a nearby town where they zoom through a woman’s living room, encounter a dog playing in his yard, and distract a bathrobe-clad citizen from his midnight snack. Who knows what will happen next Tuesday?

‘Light-hearted and quirky, it is sure to appeal to a child’s sense of adventure and fun, as well as stimulating the imagination’ Booktrust

A bright, science-minded boy goes to the beach equipped to collect and examine flotsam-anything floating that has been washed ashore. Bottles, lost toys, small objects of every description are among his usual finds. But there’s no way he could have prepared for one particular discovery: a barnacle-encrusted underwater camera, with its own secrets to share . . . and to keep.

‘Wonderfully imaginative . . . The pictures are packed with details and each re-reading provides more joy’ The Bookseller

Mr Wuffles ignores all the toys people buy for him. He’s not lazy, he’s just very picky. Now Mr Wuffles has the perfect toy and he’s ready to play. But it’s not really a toy at all. It’s something much more interesting . . .

‘Expertly imagined, composed, drawn and coloured, this is Wiesner at his best’ Kirkus starred review

"This small-scale and surprisingly comedic story takes place against a placid backdrop of pale desert colors, which recedes to keep the focus squarely on the dynamic between the two lizards and the wide range of emotions that Wiesner masterfully evokes."—Publishers Weekly, starred review