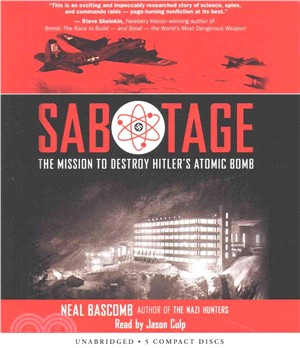 The invasion begins at night, with German cruisers slipping to harbor. Then planes roar over the mountains, and soon the Nazis occupy all of Norway. They station soldiers throughout the country. They institute martial rule. And at Vemork, an industrial fortress high above a dizzying gorge, they gain access to an essential ingredient for the weapon that could end the war: Hitler's very own nuclear bomb.

THE NORWEGIANS FIGHT BACK

When the Allies discover the plans for the bomb, they agree Vemork must be destroyed. But after a British operation fails to stop the Nazis' deadly designs, the task falls to a band of passionate Norwegian commandos--young men who love their country and long to free it from Nazi rule. Armed with little more than skis, explosives, and great courage, they will survive months in the snowy wilderness, elude a huge manhunt, and execute two dangerous missions. The result? The greatest act of sabotage in all of World War II.
Neal Bascomb is the author of the New York Times bestselling books The Perfect Mile and Hunting Eichmann, as well as Higher, Red Mutiny, andThe New Cool. He lives in Philadelphia, Pennsylvania. Please visit his website at www.nealbascomb.com and follow him on Twitter at @nealbascomb.
PrevNext