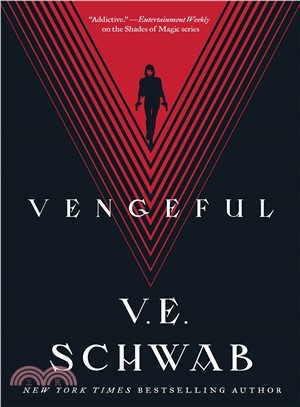 From the author of A Darker Shade of Magic comes Vengeful, the highly-anticipated sequel to V. E. Schwab's debut adult novel Vicious, a masterful tale of ambition, jealousy, and superpowers.

A super-powered battle of genius, cruelty, and the lengths one will go for vengeance—V. E. Schwab returns with the end to the Villains duology.

Magneto and Professor X. Superman and Lex Luthor. Victor Vale and Eli Ever.

Sydney Clarke once had Serena—beloved sister, betrayed enemy, powerful ally. But now she's alone, except for her thrice-dead dog, Dol. And then there's Victor, who thinks Sydney doesn't know about his most recent act of vengeance.

Victor himself is under the radar these days—being buried and re-animated can strike concern even if one has superhuman powers. But despite his own worries, his anger remains.

And Eli Ever still has yet to pay for the evil he has done.

“Schwab's characters feel vital and real, never reduced to simple archetypes... In a genre that tends toward the flippant or pretentious, this is a rare superhero novel as epic and gripping as any classic comic. Schwab's tale of betrayal, self-hatred, and survival will resonate with superhero fans as well as readers who have never heard of Charles Xavier or Victor von Doom.” Publishers Weekly, starred review

“A brilliant exploration of the superhero mythos and a riveting revenge thriller.” —The Guardian on Vicious

VICTORIA (V. E.) SCHWAB is the author of the New York Times bestselling Shades of Magic series, as well as a number of middle grade and young adult novels, including This Savage Song. She has been called "the heir to Diana Wynne Jones." Her dynamic work has caught the attention of major TV and film studios. Schwab has a Masters degree in Art History from the University of Edinburgh. She currently lives in Nashville, Tennessee, but frequents Edinburgh.
PrevNext