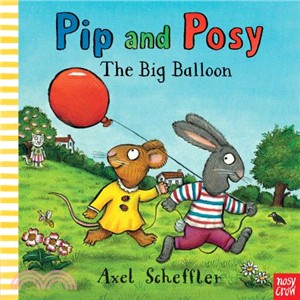 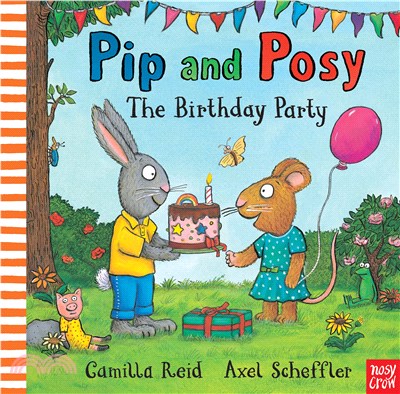 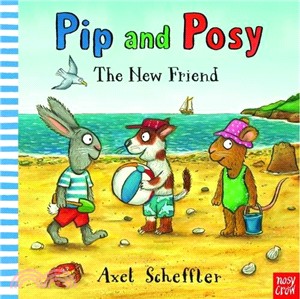 Pip and Posy: The Birthday Party  最新出版
The much-acclaimed toddler book series by Camilla Reid and The Gruffalo illustrator, Axel Scheffler. Simple, engaging and funny stories which reflect the ups - and downs - of toddler life. Major new animation series launching on Milkshake and Sky in 2021Pip and Posy are best friends - they love to play, and make things, and have fun.

But just occasionally they get cross or sad, and sometimes things go wrong that are beyond their control. And that's when kindness, sympathy - and resourcefulness - make everything better. In The Birthday Party, It's Posy's big day and she's delighted with Pip's present of a beautiful toy bus.

The friends have fun with the bus, then play some energetic party games and, before long, it's time for the birthday tea. But just as Pip is carrying the magnificent birthday cake to the table, he trips over the bus and flies into the air - along with Posy's cake! All small children will enjoy finding out what happens next - and seeing how Pip and Posy make the best of a very, very sticky situation. A relatable story about navigating life's minor catastrophes!There are loads of titles to collect .

Pip and Posy:The Friendly Snail
Pip and Posy are spending a lovely afternoon outside, but Pip wants to do some gardening quietly and Posy wants to have fun playing noisy games. Posy s racket even frightens Pip's new snail friend back into its shell... Oh dear! But when a big, greedy bird tries to take Pip's snail, it turns out Posy's loud voice can be quite useful after all! A heart-warming, relatable story about how sometimes it's good to be quiet and other times you have to be a little LOUD.

Pip and Posy: The Christmas Tree
It's Christmas time and Pip and Posy are busy decorating the tree with candy sticks, and biscuits, and beautiful sugar star. But the strange thing is that, everytime Posy goes out of the room, when she returns, there's one less decoration on the tree. Eventually, there are NO decoration left AT ALL...oh, dear!

All young readers will enjoy the moment when Posy finds Pip lying on the sofa, feeling sick, but will they guess how she decides to tackle Pip?

A charming and funny new Pip and Posy story about the problems caused by telling fibs, with gentle lessons about being kind and tooth-brushing!

Pip and Posy: The Super Scooter
Pip and Posy are typical toddlers: they are best friends and they have fun ...but sometimes, just like any other toddler, they get cross and sad, so sometimes it takes friendship, sharing and understanding - and a cuddle - to make things better. In Pip and Posy and the Super Scooter, Posy snatches Pip's scooter and tries to ride it, but she falls off and hurts her knee. Though Pip was very cross, he comes running to help her. Posy says sorry, and Pip forgives her before they all build a sandcastle in the sandpit where it's nice and soft.

Pip and Posy: The Scary Monster
When Pip comes to Posy's house wearing a scary monster mask, he gives Posy a bit of a fright! Oh, dear! But when she works out it's only Pip, she feels much better, and they share the biscuits she's made. Hooray!

Pip and Posy: The Snowy Day
It's a beautiful snowy day and Pip and Posy can't wait to go out and play. They have all sorts of fun, until they decide to build a snowman, when things start to go a little bit pear-shaped. Pip wants a snowRABBIT, but Posy wants a snowMOUSE! An argument erupts and very soon both friends are cold and wet - and very sad. Oh dear! Happily the friends resolve their differences over a cosy craft session indoors.

Pip and Posy: The Bedtime Frog
When Posy goes to stay at Pip's house they have lots of fun together before bedtime. But just as they switch out the light, disaster strikes: Posy realises that she has forgotten her favourite frog toy. Desperate to help his distraught friend, Pip offers Posy a range of different toys to substitute for her frog, including his own favourite frog money box. But none of them will do, "that's the wrong frog!" Posy wails. It is only when Pip gives Posy his own, very favourite, pig toy that Posy is comforted and that the friends can get a good night's sleep, at last. Pip was very nearly asleep when he heard a voice. "Froggy!" said the voice. It was Posy. "I've forgotten Froggy she sniffed. "I CAN'T SLEEP WITHOUT MY FROGGY!!"

Pip and Posy: The New Friend
Pip and Posy are having a lovely day at the seaside, collecting shells and digging in the sand. But when Posy has a nap, Pip makes friends with a boy called Zac. Zac is very cool: he has lots of fun toys and beach gear, AND he's really good at handstands. So, to her dismay, when Posy wakes up, she finds that Pip is more interested in playing with Zac than her. A funny and dramatic story about working out that two's company and three's a...PARTY!

Pip and Posy: The Little Puddle
Pip and Posy are typical toddlers: they are best friends and they have fun ...but sometimes, just like any other toddler, they get cross and sad, so sometimes it takes friendship, sharing and understanding - and a cuddle - to make things better. In Pip and Posy and the Little Puddle Pip comes to play at Posy's house. They have such a lovely time after their mid-afternoon snack and drink that Pip forgets he needs to go to the loo, and soon there's a little puddle on the floor. But everyone has accidents sometimes, so Posy mops it up, and lends him some clothes. The next time Pip needs a wee, he does it in the potty all by himself.

Pip and Posy: The Big Balloon
Pip is very proud of his big red balloon. But when he lets the balloon go and it pops, he is inconsolable. Luckily, Posy has a clever idea to cheer up her friend and soon they are having fun again!