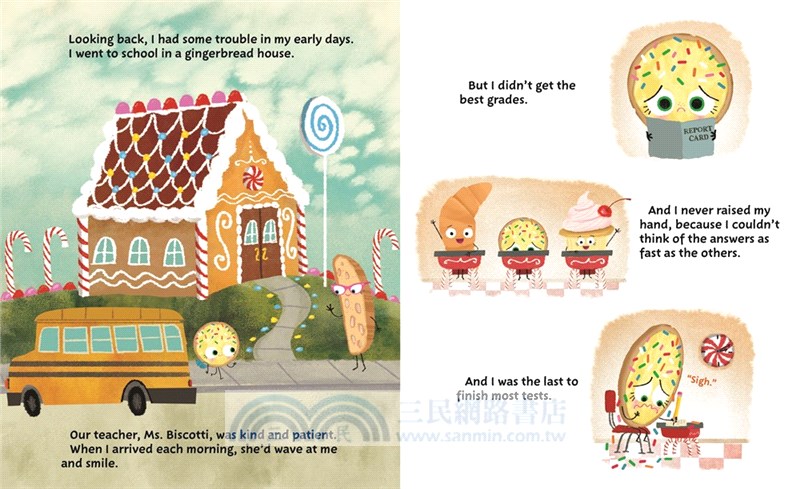 Meet the Smart Cookie! Here to join the Bad Seed, the Good Egg, the Cool Bean, and the Couch Potato is a determined cookie who realizes there is much more to intelligence than perfect scores.

This cookie has never felt like a smart cookie no matter how hard she tries, especially in comparison to all the clever cupcakes and brilliant rolls in the bakery. So when Ms. Biscotti assigns the class to create something totally original overnight, she is forced to try something totally new. Could a dash of creativity and a sprinkle of confidence be all she needs?

Readers of all ages will giggle along as they learn alongside their new favorite pal that perfect scores and having all the answers aren’t the only ingredients for intelligence.

JORY JOHN is a #1 New York Times bestselling author and two-time E. B. White Read Aloud Honor recipient. His books have won numerous state book awards and have been translated into more than twenty languages. Jory’s work includes the New York Times bestselling picture books The Bad Seed, The Good Egg, The Cool Bean, and The Couch Potato, the award-winning Goodnight Already! series, That’s What Dinosaurs Do, the popular picture books Penguin Problems and Giraffe Problems, and many other books. He lives in Portland, OR. You can visit him online at www.joryjohn.com.

PETE OSWALD is the #1 New York Times bestselling illustrator of The Couch Potato, The Cool Bean, The Good Egg, and The Bad Seed, written by Jory John. The bestselling duo also created That’s What Dinosaurs Do together. Pete is the cocreator of Mingo the Flamingo and works on numerous highly successful animated franchises as a character designer, concept artist, and production designer. He lives in Los Angeles with his wife and three sons. Visit Pete online at www.peteoswald.com.