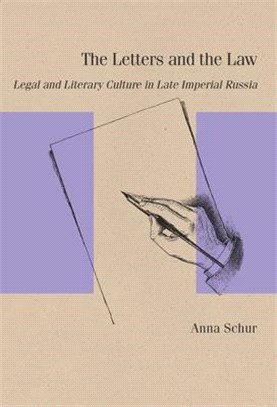 The Letters and the Law explores the fraught relationship between writers and lawyers in the four decades following Alexander II's judicial reforms. Nineteenth-century Russian literature abounds in negative images of lawyers and the law. Literary scholars have typically interpreted these representations either as the common, cross-cultural critique of lawyerly unscrupulousness and greed or as an expression of Russian hostility toward Western legalism, seen as antithetical to traditional Russian values. The Letters and the Law is the first book to frame the conflict in terms of the two professions' competition for cultural authority. Anna Schur combines historical research and literary analysis to argue that the first generations of Russian trial lawyers shaped their professional identity with an eye to the celebrated figure of the writer and that they considered their own activities to be a form of verbal art. A fuller understanding of writers' antipathy to the law, Schur contends, must take into account this overlooked cultural backdrop. Laced with the better-known critique of the lawyer's legalistic proclivities and lack of moral principle are the writer's reactions to a whole network of explicit and implicit claims of similarity between the two professions' goals, methods, and missions that were central to the lawyer's professional ideal. Viewed in this light, writers' critiques of the law and lawyers emerge as a concerted effort at protecting literature's exclusive cultural status in the context of modernization and the rapidly expanding public sphere. The study draws upon a mix of well-known and rarely studied nineteenth-century authors and texts--with particular attention paid to Fyodor Dostoevsky and Mikhail Saltykov-Shchedrin--and on a wide range of nonliterary sources, including courtroom speeches, guides to forensic oratory, legal treatises, and specialized press.