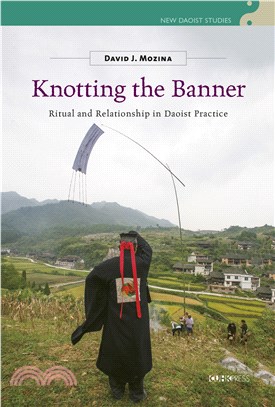 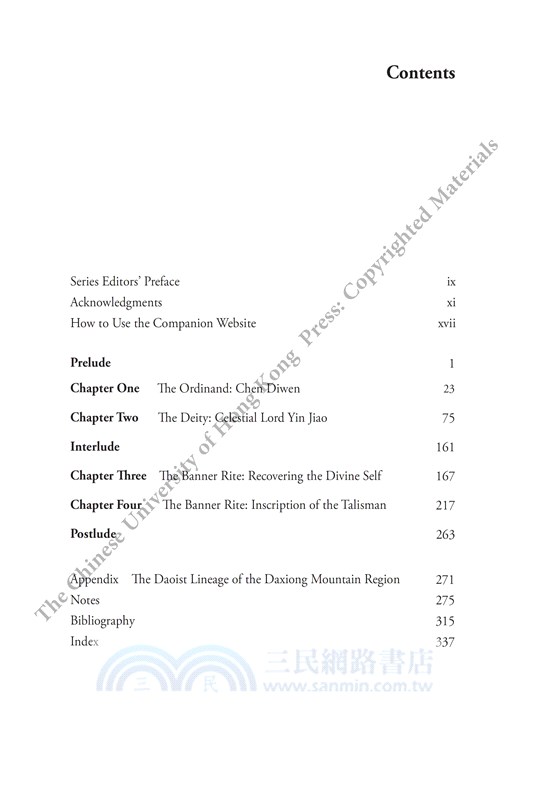 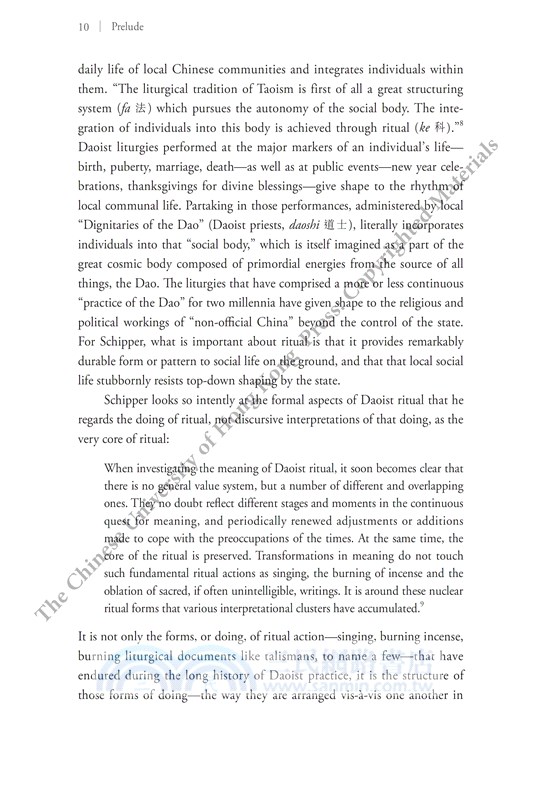 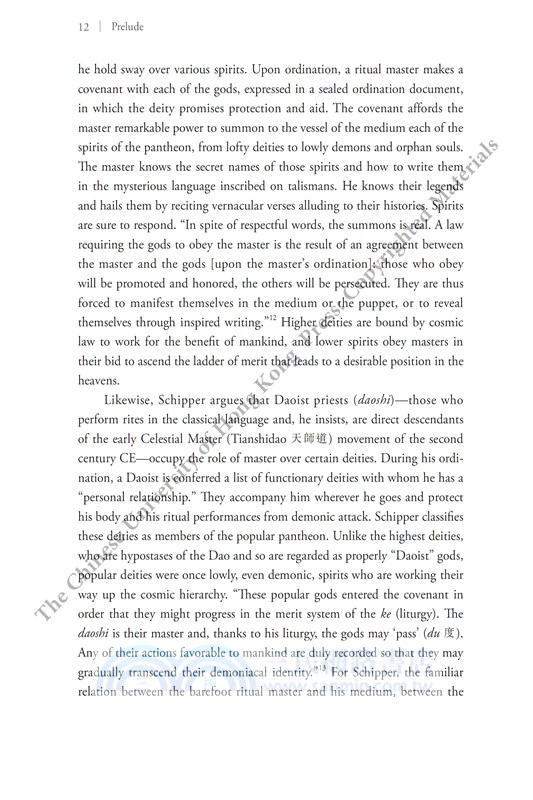 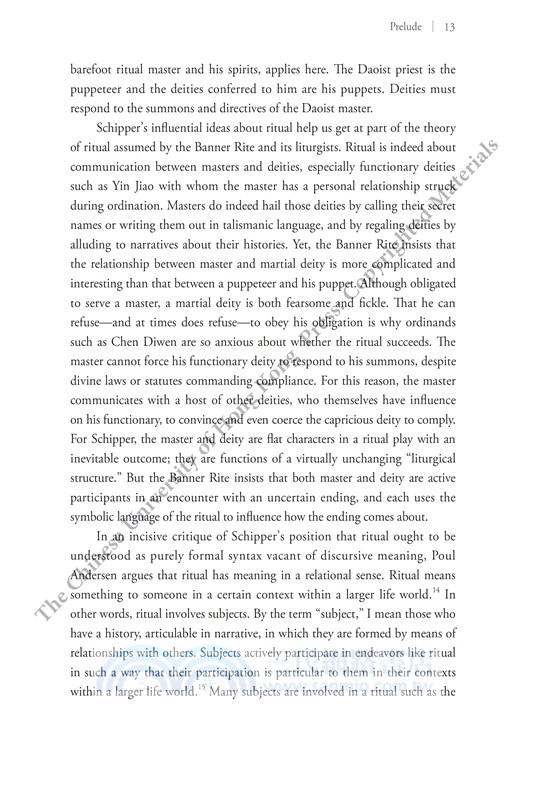 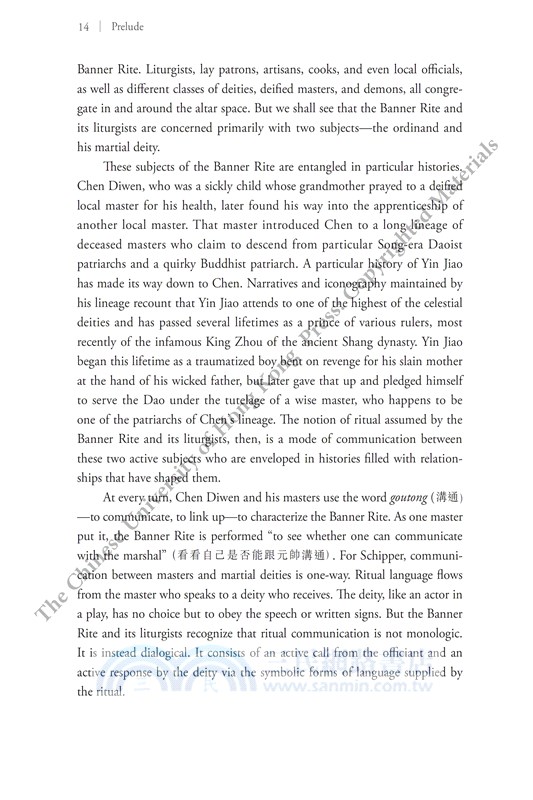 This book adds richly not only to understanding of the unique form of Daoism in Central Hunan today, but to the entire fashi tradition that rose to prominence in the Song–Yuan.

In the hills of China’s central Hunan province, an anxious young apprentice officiates over a Daoist ritual known as the Banner Rite to Summon Sire Yin. Before a crowd of masters, relatives, and villagers—and the entire pantheon of gods and deceased masters ritually invited to witness the event—he seeks to summon Celestial Lord Yin Jiao, the ferocious deity who supplies the exorcistic power to protect and heal bodies and spaces from illness and misfortune. If the apprentice cannot bring forth the deity, the rite is considered a failure and the ordination suspended: His entire professional career hangs in the balance before it even begins.

This richly textured study asks how the Banner Rite works or fails to work in its own terms. How do the cosmological, theological, and anthropological assumptions ensconced in the ritual itself account for its own efficacy or inefficacy? Weaving together ethnography, textual analysis, photography, and film, David J. Mozina invites readers into the religious world of ritual masters in today’s south China. He shows that the efficacy of rituals like the Banner Rite is driven by the ability of a ritual master to form an intimate relationship with exorcistic deities like Yin Jiao, which is far from guaranteed. Mozina reveals the ways in which such ritual claims are rooted in the great liturgical movements of the Song and Yuan dynasties (960–1368) and how they are performed these days amid the social and economic pressures of rural life in the post-Mao era.

Written for students and scholars of Daoism and Chinese religion, Knotting the Banner will also appeal to anthropologists and comparative religionists, especially those working on ritual.

"Knotting the Banner is a major contribution to the study of Daoist ritual, focused on the notion of relationships: between human and divine beings, masters and disciples, and among the people of communities that rely on the services of Daoist priests for dealing with problems related to the otherworld. In this way, it breaks new ground and will be deeply appreciated by anybody interested in the study of Daoism as a ritual tradition."

"This book is not intended for those whose certainties are settled, nor for those who see things from afar and from above. Marrying rigor and honesty, historical anthropology and meticulous ethnology, David Mozina examines the ordination of a young apprentice hoping to enter a lineage of ritual masters in the neglected region of central Hunan. His attention to that moment allows us to see the recent and distant history of this lineage, which maintains a dual Daoist-Buddhist tradition that both worships the Daoist martial deity Yin Jiao and practices a Buddhist exorcistic tradition claiming to originate in the Song-dynasty monk Pu’an. With precision, Mozina analyzes the Banner Rite, a crucial moment in the ordination ceremony. He shows how much this particular ritual and the liturgical traditions on which it draws reflect the idea that ritual is about communication between initiates and deities and the establishment of a constantly renewed contract binding men and gods. Mozina’s book is intended for all those, specialists or not, who wish to understand what ‘religion’ and ‘religious practice’ mean in China."

"This is a first-hand report on Daoism in contemporary China based on fieldwork in the nearly unknown Anhua district of Hunan province. In spite of the torments Chinese religious specialists suffered during the twentieth century, they survive and continue a long liturgical tradition flowing from the religious movements of the eleventh through fourteenth centuries. Their story is told through an exploration of the Banner Rite, one of the most mysterious rituals in the entire repertoire of these Daoists. This wonderful book, full of data about religion and society, is a major contribution and should attract new researchers to the burgeoning field of Hunan Daoist studies."

"The emerging field of Daoist ritual is essential to our understanding of Chinese culture and society, but much of the work being done is technical and not easily accessed by non-specialists. David Mozina’s highly readable and engaging book is a breakthrough. He explains the fundamental logic of Daoist ritual and the worldview it stages in a way that both makes immediate sense and does full justice to the complexity of historical developments, regional variations, and diversity of ritual traditions. He starts from a detailed, exemplary ethnography, focusing on one young priest’s ordination ritual in central Hunan, then he explains how this ritual ‘works’ based on his thorough command of the deep textual heritage it draws on. His book’s fundamental insights will nurture scholarship for many years to come."

"Based on original fieldwork and wide reading in the field, Knotting the Banner adds richly not only to our understanding of the unique form of Daoism still thriving in Central Hunan today, but to the entire fashi tradition that rose to prominence in the Song-Yuan. Canonical sources are put to excellent use by the author in explaining the liturgical work of married Hunan Daoists, and his fieldwork furnishes insight into the centrality of their liturgical lineages. By conjugating fieldwork and historical analysis, this book makes a major contribution to our understanding of modern ritual traditions, especially in South China."

David J. Mozina studies contemporary Daoist and Buddhist ritual in central Hunan, and the roots of that ritual in Song, Yuan, and late imperial ritual traditions.

Chapter One   The Ordinand: Chen Diwen

Chapter Three   The Banner Rite: Recovering the Divine Self

Chapter Four    The Banner Rite: Inscription of the Talisman

Appendix The Daoist Lineage of the Daxiong Mountain Region